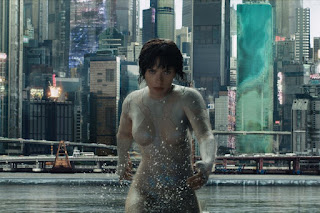 Scarlett Johansson nude!  And wet!  Well, it's as close as this movie gets,
and it seems to be all the rage to include it in any mention of the film.

The "who is allowed to portray whom" in major movies grinds on, with "Ghost in the Shell" the latest victim, says Paramount.

Funny thing is:  if this list at Slate* is comprehensive in covering all the excuses for offending white sensibilities (at least; who listens to Asians complain unless whites agree with them?  Seriously.), then there is another common denominator in these films:

I mean, I liked "Doctor Strange," but it was no Captain America movie, despite the quality of acting Frumious Bandersnatch is capable of.  The rest of them?  Well, 'Ghost in the Shell' made the mistake, not of casting Scarlett Johansson, but of turning a familiar tale (or two; several of the anime movies make their way into the plot of the live action film) into a love story because:  Hollywood, amirite?  Some of the films listed I passed on just from seeing the trailers:  "Exodus:  Gods and Kings."  Please.  Although frankly, after "Prometheus," I never want to see another Ridley Scott picture ever.  How the mighty have fallen.

"The Great Wall"?  Ditto above, minus the Ridley Scott references.  At least what I saw from the trailer.

"Persia:  The Sands of Time"?  Kinda like the other two, I'm thinking the plot and overall treatment of the cultures represented is far more offensive than who the lead actors are.  In fact, I'd say that for all the movies listed there.  The utter nonsense of Johnny Depp's portrayal of Tonto is still nothing compared to the absolute drivel to pour out of Hollywood about Texas in the 19th century, and about the American West, period (or the mess that was the movie he played Tonto in).  The offense of crap movies starts with the story; the actors "miscast" in them are merely the simplest place to land outrage on.  Because, frankly, if they make another movie like "Ghost in the Shell" but cast a Japanese lead next time around, the film will still bomb.

But Hollywood will blame the Japanese lead; and then where are we?

*and if you read the entire Slate article, you'll find out Zoe Saldana should never have taken the lead in a movie about Nina Simone because Ms. Saldana, although black, is not black enough.  You can't make this stuff up.


Zoe Saldana on accepting the role of the darker-skinned Nina Simone in the biopic Nina on the grounds that she helped a female-drive script get produced: “Do I continue passing on the script and hope that the ‘right’ black person will do it, or do I say, ‘You know what? Whatever consequences this may bring about, my casting is nothing in comparison to the fact that this story must be told.’ ” [See also: Blaming the Industry]