Don't blame you, don't blame me, blame that feller behind the tree! 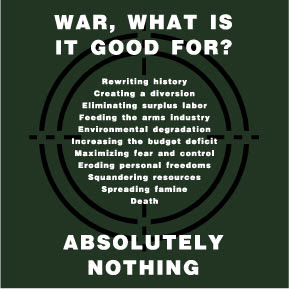 So, the New York Times asks:

nine experts on military and foreign affairs to reflect on their attitudes in the spring of 2003 and to comment on the one aspect of the war that most surprised them or that they wished they had considered in the prewar debate.

Paul Bremer blames "the American Government," of which he apparently was not a major part. Oh, "I should have pushed sooner for a more effective military strategy," but it's all good, because: "The vicious spiral was finally reversed by the change in strategy the president put in place a year ago."

Leave it to Anthony Cordesman to point out that:

a combination of the “surge, win and hold” military tactics, American-led nation-building efforts that focused on local and provincial needs, and the cease-fire declared by Moktada al-Sadr could create today’s new opportunity for “victory.”

That is, the victory L. Paul Bremer now declares. Of course, Mr. Cordesman is as surprised as anyone that a team which can invade a country, can't seem to decide what to do with it afterwards:

As a Republican, I would never have believed that President Bush, Vice President Dick Cheney and Secretary of Defense Donald Rumsfeld would waste so many opportunities and so much of America’s reputation that they would rival Lyndon Johnson, Robert McNamara and McGeorge Bundy for the worst wartime national security team in United States history.

Maybe partisanship is the problem, if you think Democrats are congenitally unable to conduct wartime national security, but Republicans, by virtue of being Republicans, are.

Danielle Pletka blames Saddam Hussein and the Iraqis themselves:

And it turns out that living under Saddam Hussein’s tyranny for decades conditioned Iraqis to accept unearned leadership, to embrace sect and tribe over ideas, and to tolerate unbridled corruption.

Richard Perle agrees, sort of. Seems we should have invaded Iraq, then left once the government was toppled:

The right decision was made, and Baghdad fell in 21 days with few casualties on either side. Twenty-five million Iraqis had been liberated and the menace of Saddam’s monstrous regime eliminated.

Then the trouble began.

Methodically clearing areas of enemy fighters, and then securing them to protect the populace, seemed like a risky luxury in March and April. By August, with the insurgency in bloom, it had become a colossal missed opportunity.

But Anne-Marie Slaughter points out we never understood Iraq well enough in the first place:

Our government knew how to destroy but not how to build. We had toppled a regime, and in coming months we would dismantle Saddam Hussein’s bureaucracy and disband his army. But we did so with absolutely no understanding of how to build a liberal democracy, or even a stable, rights-regarding government with broad popular support.

Such a government requires a prosperous economy, a secure society and sufficient cultural unity to allow everyday interaction among different ethnic groups in workplaces, schools, hospitals, the army and the police. Protecting the symbols of a common and proud heritage is Democracy Building 101 — at least for anyone who understood anything about Iraqi history and culture.

Fred Kagan, however, says it's okay, we've learned from our mistakes:

Once we pushed most of our combat forces into close interactions with the Iraqi people, the information they obtained ensured that the targets they hit were the right ones. Above all, the compassion and concern our soldiers have consistently shown to civilians and even to defeated and captured enemies have turned the tide of Iraqi opinion.

Kenneth Pollack can't manage to do much more than wring his hands. He, too, is surprised at how incompetent the George W. Bush Administration has been, but he worries about leaving Iraq in shambles and letting it fall into certain civil war. No word from Mr. Pollack on how Iraq is better of with US troops there, however, or when they will start to turn the country from warfare to civilization again. Paul Eaton, meanwhile, blames Congress:

Had Congress defended the welfare of our armed forces by challenging the concentration of power in the hands of the president, the vice president and the secretary of defense, our Army and Marine Corps would not be in the difficult position we find them in today.

No one, in other words, is responsible for this mess. Well, the Iraqis are, according to Ms. Pletka; or the Congress is, according to Gen. Eaton; or Americans are, because of their gross ignorance, according to Professor Slaughter (it's a good thing she's not an advisor to a Presidential candidate!); or the Administration is, for making us believe they were competent when, in fact, they weren't. Or somebody wasn't. Maybe it was just Rumsfeld's fault (Gen. Eaton, again).

What's interesting is that none of the people responsible for cheerleading this fiasco is willing to say: "I was wrong. It's been a disaster. Mea culpa, mea culpa, mea maxima culpa." Mr. Perle, Ms. Pletka, Mr. Kagan, Mr. Bremer, and Mr. Cordesman all agree it was a splendid idea, at first. Mr. Cordesman and Ms. Pletka, along with Mr. Flick, even run up the old excuse that, if they were fooled about "WMD" and chemical weapons and all the other excuses for this war that have proved bootless, then they were in good company. (Mr. Flick even references Colin Powell's UN testimony, without a hint of irony at what a pack of lies it was.) All in all, a remarkably "expert" performance. But hardly an unexpected one. And perhaps, more than any other example I could name, a microcosm of why Barack Obama (who is relatively unstained by this war, or by association with such "expertise) has come from nowhere to do so well in the Democratic primaries; and why turnout in the primaries is setting records in many states.

Maybe people are just sick of the excuses.