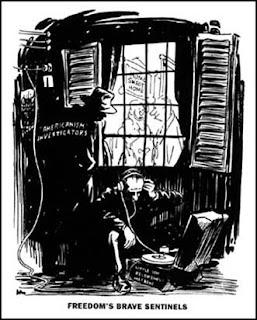 When I think about Presidential signing statements; Gitmo; the suspension of habeas corpus; immunity for telecommunications coporations; wiretapping; extraordinary rendition; "black" prisons; and all the apparatus of the "Global War on Terror" (whose acronym also describes "Grand Waste of Time," or "Treasure," if you prefer), I think how far this country has fallen, and how fast.

But then I reflect on the court rulings which have not challenged this regime, not seriously. Courts are the most conservative of creatures, bound by custom and requirement and law to follow precedent, not present-day whim. Many of the court rulings, or refusals to rule, on the Administration's prosecution of the GWOT, much of their powerlessness in the face of the round up of Muslims after 9/11, for example, is due as much to the precedents in the law as it is to the structural nature of courts, to their inability to react rapidly to a current situation. Congress we almost expect to betray cowardice; but courts more often than not betray the status quo, and there isn't that much about the Bush Administration's actions which is that far from the history of American jurisprudence; not when it comes to injustice against the weak, the powerless, and the alien.

I think about Attorney General Mukasey, and Chief Justice Roberts worrying more about Exxon than the people and property damaged by the Valez oil spill, and I remember Chief Justice Rehnquist openly declaring the sole province of the law the court could not afford to change, was the law of property, because so much depended on the steady and reliable application of law as applied to property. He made those comments when he took the position of Chief Justice, and he meant to draw a contrast to the Warren Court, which heavily influenced the Burger Court, which Rehnquist changed to his court. He meant civil rights rulings enjoyed no such privilege, and indeed deserved no such privilege. The courts have been reluctant to involve themselves in matters the Administration has said are central to "GWOT," and the shield has only occassionally been the defense of "national security." More often than not, the courts are willing to defer to the authority of the Administration, or at least not to challenge it outright. This has wrought great despair in many quarters, but the despair is somewhat misplaced. What we are seeing is not an attempt to rollback the gains of the Warren Court, but a return to the status quo from which the Warren Court was such a notable abberation.

Much of the "civil rights" rulings we now cherish, like Miranda and Gideon, are products of the Warren Court, not rights established by the Founding Fathers and enshrined in the Bill of Rights since the Constitution was first adopted. We forget how radical those opinions were, how much they upset the apple cart of American criminal jurisprudence, how much they made us rethink the authority of government over those accused of improper or illegal actions. We also forget that the Warren Court did not wipe away a legacy of uncivil treatment of Americans, or of foreigners, or that the House UnAmerican Affairs Committee ("HUAC") was in operation until 1975. HUAC was the driving force behind the "Red Scare" and the Hollywood "blacklist," and it worked just the way the Bush Administration does now: through innuendo and unfounded allegation, through suspicion and intimidation. It is a legacy of Brokaw's "Greatest Generation," because it grew out of the paranoia and fear at the end of World War II, and it wasn't ended itself until it took on two icons from the generation after that war: Jerry Rubin and Abbie Hoffman, people who refused to be intimidated by the committee's attention. As Studs Terkel has said, the boomers were the "greatest generation," because they changed American society for the better.

But shouldn't we despair that those changes were not permanent, that what was wrought by that generation didn't stick into the 21st century? Or would it be better to see it all in perspective, to understand that the fairness and honest and decency and the truly shining example of the "city on the hill" was never so true as when we, and the generation just before us, worked so hard to make it true? Much of American history, seen from the standpoint of justice and fairness, looks more like the internment of the Japanese during World War II, than it does like the dream of Martin Luther King, Jr. But King's dream inspired people, and it is said that overseeing the illegal and unnecessary internment of Japanese Americans inspired Earl Warren. It is not despair we need, but derermination. No, America today is not the country we thought it was; but it was only that country through the determined effort of many people, from Supreme Court justices to members of the SDS. There is always work to be done, and always history to learn from.

More of that, and less of hand-wringing, is just what we need.