We hold these truths to be self-evident 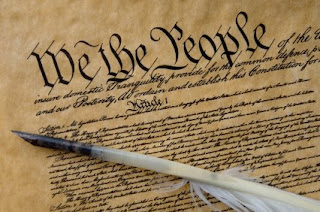 A small thought experiment, based on this section of the Constution (Article II, Section 1):

Before he enter on the execution of his office, he shall take the following oath or affirmation:--"I do solemnly swear (or affirm) that I will faithfully execute the office of President of the United States, and will to the best of my ability, preserve, protect and defend the Constitution of the United States."

Since Brown v. Board of Education, we've looked to the Supreme Court to do that. What would happen, though, if we elected a President, not to be Commander in Chief who would answer the "red phone" at 3 a.m. in a crisp business suit ("The President neve sleeps!"), or to be an expert economist with the solution to the complex financial and economic problems that beset us today, or even to rid our streets of crime and our lives of threats from scary people, but simply to preserve, protect, and defend the Constitution? It isn't realistic, of course, to expect the President to do only that, but what if we expected that as de mimimus, as the starting point? What would life look like, then?

After all, what preserves the Constitution more? Economic equity for the poor in America? Or foreign wars? Habeas corpus and the rule of law? Or Guantanamo and the continued detention of Sami Al-Arian after his acquittal in a court of law? Another $200 billion for American banks and financial institutions? Or regulation that prevents the kind of lending that created this disaster in the first place?

Sad when this simple requirement seems like such a mad dream, isn't it?