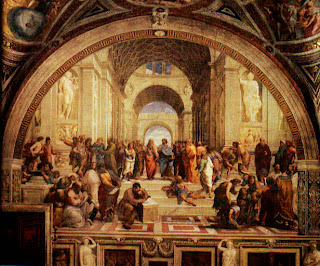 Yes, I confess, I watched the last few episodes of "Project Runway," season 4. And I come away convinced judges of fashion and I have nothing in common, and I'm perplexed by the American viewing public, since they both picked Christian over Jillian. I'm also convinced we don't need another designer, we just need to know the way home. And what we really need, is life beyond Thunderdome.

Philosophers and theologians forced to go out into the streets and interact with people in their daily lives, forced to sell and defend and make practical their theories, their philosophies, their theologies. And the most useful, most engaging, yet truest to a high standard of provocation and challenge, philosopher or theologian would win the competition. Which would mean, of course, that you pissed off enough people that they want to kill you, rather than give you the stipend you think you deserve so you can keep annoying them, or that they invite you to stay in their house tonight, and hope you don't shake the dust off your feet before you leave.

Either way, I'm sure it would be fierce.