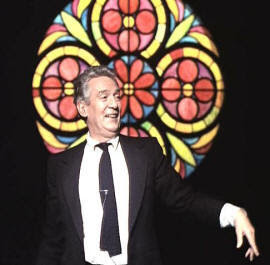 Tena clarifies a bit of my thinking this morning regarding "The Speech."

Look, Barrack didn't ask to make the speech, he was backed into a corner, and though it wasn't the best speech I ever heard him make, for someone who is in the fight of his life for the nomination, I thought he was remarkably candid.

But then, I really love the man. Perfect he's not, but as a presidential candidate, he's a close as I've ever felt that anyone came to what I think is needed at a particular time, and to what I am looking for.

No American politician who really wants the job he's running for is going to dis Israel, guys. That's just good common sense. I am permanently disenchanted with Israel, and that's putting it mildly. But I'm realistic - we have commitments.

I agree with the part about Israel; if I object, it's because the goalposts have been moved so far. But I've said my piece on that. As to the speech itself, suffice to say there's a lot of disenchantment out there, along with praise.

Athenae says she wants an "ass-kicking" to follow Obama's race speech. Much as I love Athenae, I'm wondering what that would look like. And who, precisely, would be pleased. I understand the sentiment (obviously); I'm just not sure what the benefit is.

David Kurtz at TPM says it was too "subtle," that Obama didn't bring his "A game," referring not to the content, but to the delivery. A bit more of the preacherly cadence was called for, apparently. Meanwhile Huffington Post had front page links to WaPo, NYT, TNR, Jesse Jackson, and David Corn, all praising the speech. And tonight, Jon Stewart noted that a politician finally talked about race as if Americans were adults.

On the other hand, Phila makes a good point about how, in the speech, Obama:

distances himself from Wright's "profoundly distorted view of this country," while espousing the healing doctrines of American exceptionalism and business as usual in the Middle East.

Or, as Phila puts it in comments here:

Hope for the future is swell, but I get very tired of people either ignoring our victims or paying lip service to them (which amounts to the same thing). As I said over at my place, my worry is that Obama's presidency won't be influenced enough by Wright, so to that extent, his speech wasn't reassuring; we always "getting over it," and finding "closure"...it's one of the worst goddamn things about us, and that's what I hate to see Obama (and everyone else) pandering to.

Which may just lead back to Tena's point: Obama was forced to make this speech, he didn't choose to do it. Still, there is a legitimate question of the premise of the speech itself, which is essentially Athenae's point: should Obama have accepted, even tacitly, responsibility for anything Wright said? Would he have fared better to have said: "His opinions are his opinions, and mine are mine, and he's free to say whatever he wants, but it doesn't mean I think it"? Because, frankly, I've never heard anyone accused of thinking like their pastor, except maybe the unspoken charge that JFK would have to do Rome's bidding because he was Catholic (the anti-Papist sentiment in America is strong and deep. On the other hand, so do racist sentiments; and JFK had to respond to questionsa bout his faith). Obama didn't exactly say something like that yesterday, and while I liked the speech, I'm left wondering: "Why not?" After all, Athenae is right: nobody died because of what Jeremiah Wright said; nobody went hungry because of his words. Indeed, he was trying to help people, but people not the victims of George W. Bush: people who are the victims of a vicious and uncaring system. A system, of course, Barack Obama wants to lead, not conquer. I'm still not sure a politician can be expected to do anymore than that. So we who look to wield that power wisely: are we simply looking for the power, convinced we will wield it better than "they" do? If so, all those jokes about "bleeding heart liberals" are true, and we exploit the victims as viciously as the conservatives do. If not, what is the alternative?

And for all the concerns about what a real primary race is doing to the Democratic candidates, this is where this Wright kerfluffle is going:

"Obama knows that if somebody puts him in church on some day that Wright said some crazy [stuff] like white people injected blacks with AIDS he's in a world of hurt," said Rick Wilson, who made the 2002 ads tying then-Sen. Max Cleland, a disabled veteran, to Osama bin Laden and Saddam Hussein. "I would eat this up like cake."

The entire premise of this discussion is absolutely stupid, but I'm left wondering how someone would "kick ass" on this topic. Is there a knockout blow that pre-empts Mr. Wilson's glee? If so, I don't know what it is. So maybe Obama should have more decisively put this to bed than he did. That doesn't mean I don't still believe Obama is going to run a bulldozer through that trashpile. There is a distinctive difference between Barack Obama and John Kerry. John Kerry never inspired the kind of crowds Obama draws. And there is an almost visceral disgust with the gutter politics of Karl Rove that may well surprise Mr. Wilson.