The Power of Nightmares 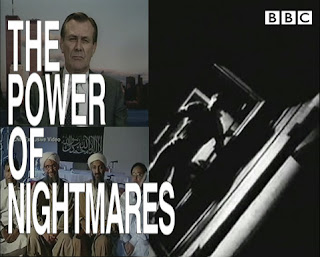 I'd never heard of this documentary, and yet it turns out there's a great deal of information on the web about it (no surprise, there, actually). Video links are available here Google video and here (the latter has links to download and burn the film to DVD). The premise of the documentaries is that the terror threat is, in the words of the film, a fantasy. It blames the rise of the two linked groups, the neo-conservatives and the Islamic militants, on the failure of "liberalism" to change/save the world (and yes, there is a dark parable there for the "change" being offered by the current crop of Presidential candidates, but it's hardly on the same scale as what emerged from the ashes of the "Good War.") I haven't watched these films yet; I heard some of if on Pacifica this morning (a fund raiser special). It struck me how in tune this information, from 2004, was with what Noam Chomsky said recently. It also struck me just how much we are the victims of our own propaganda, and just how much that propaganda is purveyed by our media, and our own willingness to be lied to.

Digby and Atrios, and many others, complain that its the media that lies to us, and is biased in favor of the powers-that-be. That's true, of course, but we prefer the lies. Watch these films and ask yourself why they never show up on American TV; not even on HBO or Showtime.

The bit I heard was apparently from Part I. The narrator related how a book, The Terror Network, detailed the connections between terrorist groups of the 1980's and the USSR. This was, per the documentary, such a persuasive book that when William Casey took over as Director of the CIA, one of his first orders was for the Agency to produce evidence proving that Soviet Russia was behind all the terrorist groups at large in the world, as the book alleged. The agents told Mr. Casey that was impossible for one very simple reason: the theory wasn't true. And they knew it wasn't true, because they had made it up.

It was a slander invented by the CIA to damage the reputation of the USSR. And now the head of the CIA was telling them to find evidence to prove it. Even when they showed him the files proving they had created this stories out of whole cloth, Mr. Casey insisted evidence supporting them be found.

Thus do we become prisoners of our own lies.

The story goes on, however. The neo-cons, of course, considering themselves and the USA as the moral center of the universe, saw the collapse of the USSR as the vindication of the policies of Ronald Reagan. Nothing, we should know now, could be further from the truth. The system of government, and the economic system, erected by Lenin and then Stalin and on through the 20th century, simply collapsed. It was rotten to the core, and the people had stopped believing in it and the central government. By the time the house of cards toppled over, Moscow was ruling Moscow, and not much more.

If that sounds like Kabul in Afghanistan, or the "Green Zone" in Iraq, it should. By the way, why do we insist the "government" in Baghdad controls a nation is clearly doesn't govern, while we talk openly about how much of Afghanistan Kabul doesn't control? Because we think we can still blame the Russians?

Afghanistan plays into this discussion and the film at this point. The neo-cons, like the Islamic militants they know fear and desire at the same time (they are nothing without an enemy!), are convinced the loss of Afghanistan hastened the collapse of the USSR ("Charlie Wilson's War"). Again, that's the tail wagging the dog, if at all; but it allows a marginal player on the fringe to imagine themselves the heir to the throne and the power behind the coup. Ironically that's an attitude, per the film, shared by the neo-cons and the Islamic militants.

It's seems the "Arabs" (if I recall the documentary correctly) decided they caused the collapse of the Soviet Union, as well as their retreat from Afghanistan (if anything, Afghanistan proves the USSR was a paper tiger, not the fearsome monster of "Red Dawn."). Having convinced themselves of their importance, they discerned a world-wide Islamic call to arms to defeat evil wherever they identified it. And at this point the faction that preferred working within the system, and the faction that wanted to use the tools of war and violence, began to diverge. And here Osama Bin Laden, largely because of his family money, was drawn into the influence of the latter camp, and given a position of power and authority.

The documentary will tell you the rest. The simple lesson so far, is how disastrously wrong US foreign policy has been practically since World War II, and how willing we still are to believe in spooks and monsters and evil foreigners lurking across the waters that created "Fortress America." The neo-cons who are simply the Brig. Gen. Jack D. Ripper of the military-industrial complex which has been American foreign policy for the past 60 years are twin sons of the Islamic militants they loathe and respect. What else is it but respect to imagine a handful of rag-tag criminals can destroy your world and your way of life?

Here is the BBC summary of the documentary, from 2005. They sum it up rather nicely this way:

The rise of the politics of fear begins in 1949 with two men whose radical ideas would inspire the attack of 9/11 and influence the neo-conservative movement that dominates Washington.

Both these men believed that modern liberal freedoms were eroding the bonds that held society together.

The two movements they inspired set out, in their different ways, to rescue their societies from this decay. But in an age of growing disillusion with politics, the neo-conservatives turned to fear in order to pursue their vision.

They would create a hidden network of evil run by the Soviet Union that only they could see.

The Islamists were faced by the refusal of the masses to follow their dream and began to turn to terror to force the people to "see the truth"'.

That last sentence dovetails nicely with an article I was just reading in Lapham's Quarterly, "Band of Brigands" (sadly not available on-line). Mr. Mueller presents evidence that thugs and criminals have often been employed, throughout history, by those in power. Violence is a very effective tool of control. He traces the practice through medieval Europe into Bosnia-Herzegovina, Rwanda, down to Iraq. It's the tool of the insurgents against the occupying US forces, but it just as surely being used against the people of Iraq.

The BBC article ends with an interesting note from the news for 2005:

The Power of Nightmares will be broadcast over three nights from Tuesday 18 to Thursday, 20 January, 2005 at 2320 GMT on BBC Two. The final part has been updated in the wake of the Law Lords ruling in December that detaining foreign terrorist suspects without trial was illegal.

Something, I note, the Supreme Court has yet to do, as Gitmo is still functioning, and the Congress is still making sure it can function.

I've been reminded recently that I pointed out we are not the lid on the pot in Iraq, but the fire beneath it. This documentary makes me realize that's not a bug, but a feature. And it will be, for a very long time.