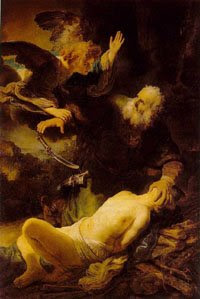 Jacques Derrida, in a 1999 edition of Donner la mort ("The Gift of Death"), newly translated into English, added a priére d’insérer ("flysheet"), with this notation about the story of Abraham:

According to Kierkegaard's writings, Abraham asked for God's forgiveness, not for having betrayed him, but for having obeyed him!

I'm off to find the source of that thought, and to consider its consequences. Derrida links them to Western civilization:

How does one interpret Abraham's secret and the law requiring his silence?....Our reason forces us to take it on board on the high seas and just prior to our shipwreck. It assigns to us an inalienable heritage. Granted, we can deny it, but all the same it remains undeniable, and continues to dictate to us a certain reading of the world. A reading of what a "world" means....

Which is one way to go. But what does it mean personally, for believers and even non-believers?

That's what I'm off to think about, for a bit.