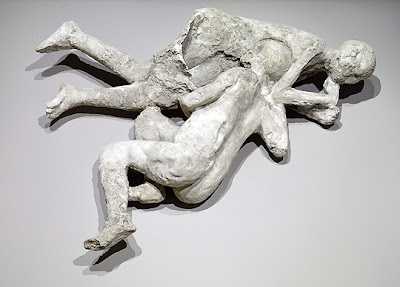 The museum here had an exhibit of items and casts made from the ruins of Pompeii. Most of the items were jewelry and metalwork which had survived, or statuary, and frescoes from the walls of houses.

One of the statues, for instance, was of a lady, undoubtedly a Roman of wealth and prestige, rich enough to commission the work, a full size statute of herself. But found in the ruins of Pompeii, it had clearly been altered, and not by the volcano. The woman's face had been carefully removed from within the modest headcovering (nearly a chador!) she wore, and a new head and face modeled slightly beneath the old (it was clearly smaller, and the chisel marks where the head had been separated from the cloak were evident). The new face? Livia, wife of Ceasar Augustus, the first emperor to be declared divine by the Senate. He and Livia were the model couple of a newly domestic Rome. Octavian, his adopted son and heir to power after Augustus' death, was filius divi (son of god), and Claudius claimed divinity through Octavian, and posthumously made his aunt, Livia, divine as well. So there were religious and secular reasons to honor Livia with a statue in a personal home.

It also ties together the idea of devotion as a personal affair (many houses had items indicating worship of Hercules, no surprise as Herculaneum was nearby), or even Isis, the Egyptian goddess. Bacchus was also a favored god. But that was private; publicly, the worship went to Caesar, after Augustus. The same Augustus who sent out a decree that all the world should be taxed, according to Luke. And it was the filius divi whose likeness was probably on the coin the Pharisees challenged Jesus with. A secular ruler who claimed the right to worshipful devotion as the price of Roman citizenship.

And today, politics, or more properly the idealization of American "citizenship", is widely considered a secular religion in America. It's pressed on us by journalists and cable news stations, by newspapers and pundits, by commentators and even critics. We all accept that the most important thing is to be an American, even if we can never agree on just what being an American means. And many, even religious persons, even clergy, strongly insist that religion in American life should be a private, a personal, affair. Much the same compromise worked out by Rome, the multi-cultural empire and civilization ours is most modeled on.

This, for example, should sound familiar:

Paul was a Jewish visionary following in Jesus' footsteps, and they both claimed that the Kingdom of God was already present and operative in this world. He opposed the mantras of Roman normalcy with a vision of peace through justice, or, more fully, with a faith in the sequence of covenant, nonviolence, justice, and peace. (In Search of Paul, John Dominic Crossan and Jonathan L. Reed, (New York: HarperCollins 2004, p. xi).

Piety, war, victory, and peace: the mantra of America since World War II. Augustus and Livia represented public piety, the kind approved by the empire: reliance on family, on money, on society, on wealth, on social standing, on approval by the masses. Sound familiar? Sound like anything Jesus promoted? And yet today, one of the most popular "Christian" preachers is Joel Osteen, of whom Matt Taibbi recently wrote:

Of all the vile, fake, lying-ass, money-grubbing shyster scumbags on the face of this planet, there is perhaps none more loathsome than Osteen, a human haircut with plastic baseball-size teeth who has made a fortune selling the appalling only-in-America idea that terrestrial greed is actually a form of Christian devotion. "God wants us to prosper financially, to have plenty of money, to fulfill the destiny He has laid out for us," Osteen once wrote. This is the revolting, snake-oil-selling dickhead that John McCain actually chose to pimp as number one on his list of inspirational authors. So much for "go, sell everything you have and give to the poor," and all that other hippie crap from the New Testament.

Now, the New Testament is seldom mentioned in the same breath as the "DFH's" (Dirty F*cking Hippies) who proudly proclaim their opposition to both the war and, in general, organized religion. The DFH's, by and large, would prefer religion to remain a private matter, and frankly, when it goes public in America, more often than not it supports the Roman vision of "a faith in the sequence of piety, war, victory, and peace." But the vision of the DFH's is little different. Both Osteen, McCain, and the DFH's, would have been comfortable in Pompeii, I suspect. All they would have missed would be some of the modern comforts brought to us by fossil fuels, but otherwise....

Lest you think I am unfairly, or unkindly, drawing parallels between Rome and the present day, let me point out that I'm only following in the footsteps of Paul:

That opening [of 1 Thessalonians] "Paul, Silvanus, and Timothy, to the church (ekklēsia) of the Thessalonians in God the Father and the Lord Jesus Christ: Grace to you and peace," was much more subversive than we imagine. The standard Pauline term for a Christian community is ekklēsia, a Greek word today usually translated "church." But the word originally meant citizens of a free Greek city officially assembled for self-governmental decisions. Maybe that was perfectly innocent, but also maybe not. And anyone familiar with Judaism would have heard in his "peace" the content of the Jewish shalom of justice and not that of the Latin pax of victory.

Next, Paul belives absolutely that "Jesus" or the "Messiah/Christ" or the "Lord" all refer to the same person. Paul can spaek of the Lord Jesus Christ or of the Lord Jesus or, most simply, of the Lord. On the one hand, "lord" was a polite term usable by slave to master or disciple to teacher. On the other, "the Lord" meant the emperor himself. What we see here is what Gustav Adolf Deissmann described, almost a hundred years ago, as "the early establishment of a polemical parallelism between the cult of Christ and the cult of Caesar in the application of the term kyrios, 'lord.'" Or, if you prefer, polemical parallelism as high treason. (In Search of Paul, John Dominic Crossan and Jonathan L. Reed, (New York: HarperCollins 2004, p. 166.)

I like the emphasis on the distinction between shalom and pax, there. "Freedom is not free!," we are constantly told now, especially in the wake of the collapse of the Cold War and the need to continue seeing the world in Manichean terms (although even Manichee wasn't quite so simple-minded). That appeal is to the Latin pax, to peace through victory, through power, through control. Funny that's never happened since World War II, and yet we keep pushing it as the basis for American foreign policy. Which brings us back to "polemical parallelism as high treason." I just wonder how theology would do that today.

But getting back to Rome and Pompeii, did you know that the silver service: fine pieces of dishware and serving pieces made from silver, originated in Rome? Several such pieces were found in Pompeii, and the workmanship was equal to anything I've seen in Europe or America. Then, as now, such items denoted wealth and status and sophistication, and were highly prized. What is that the French say? The more things change, the more they remain the same.....

Much of what was left behind in Pompeii, we would leave behind today, 1929 years later: jewelry and money and metal objects that didn't melt away in the burning ash and superheated air. Oh, and skeletons; lots and lots of skeletons. Ours are larger today, that's all. The average male stood 5'7" tall, the average female 5'1". The casts of the children clutching their parents were the most poignant. The cast in the picture has been identified as a mother and her daughter who were fleeing to escape the explosion. Some things, indeed, never change.