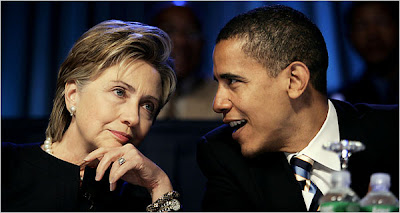 There are a lot of reasons, of course: mistakes, strategy, organization; some even say misogyny. So I think this is only one, among many. Still, it is a not insignificant one.

Hillary, the CW goes, found her "voice" when she became a populist standing up for "white, hard working Americans" (even NPR repeated the racial designation in re-capping the Democratic primary this morning). But someone counted the number of times Hillary said "Me," "my,", or "I" in her non-concession speech on Tuesday night. In an e-mail to her supporters announcing her intention to endorse Sen. Obama, she uses the personal pronouns 21 times in 9 paragraphs. She uses the plural pronoun, too: "us." But she never says "we."

She clearly found her voice by speaking as the standard bearer for a class of people she identified as "white, hard working Americans," and there was almost a touch of unintentional comedy when she campaigned in the Midwest, and seemed to claim she'd been born in every state from Illinois to Pennsylvania, and been raised to adulthood in each of them, too. But the focus was always on Hillary, and what she was going to do for you.

Listening to that NPR story this morning, I realized that in only one excerpted speech did I hear Barack Obama talk about "me" or "I", and that was in his speech about race. His favored pronoun is "We," and, as NPR pointed out, one of the iconic moments of the campaign came when, in defeat, he still spoke of victory, but it was the victory of: "Yes we can." Listen to Obama's speech on Tuesday night again, and consider how many times he says "us" and "we," and how seldom, if at all, he speaks of "me." Some Hillary supporters even said Tuesday night was "Hillary's night." I've yet to hear Barack Obama claim any night, even Tuesday night, as "his" night.

It's a subtle difference, but an important one. People like to hear a politician say he or she will stand up for them, will be their representative, their advocate, their lawyer. It was part of John Edwards' spiel, though he never used it as effectively as Hillary did. But what they like even more, is a politician, or anyone in a leadership capacity, who speaks of "we," who talks about "us." Hillary's appeal as the warrior was strong, but she was still telling us what she would do on our behalf. Obama's appeal was a little stronger, because he told us what we could all do, together.

And that made all the difference.