What Does the Lord Require of You? 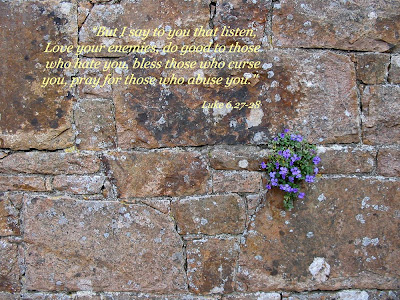 I have to admit, I do love a good fight. In this corner, Barack Obama:

"I think you'll see that he was just making stuff up, maybe for his own purposes."

In this corner, James Dobson:

Tom Minnery, a senior vice president at Focus on the Family, responded: "Without question, Dr. Dobson is speaking for millions of evangelicals because his understanding of the Bible is thoroughly evangelical."

The quarrel, of course, is about how to interpret the Bible. Atrios says this is what's wrong with our politics:

According to the AP, Dobson says that Obama is distorting the Bible. This type of stuff is an inevitable consequence of injecting religion into politics once you understand that the actual details of religious beliefs do matter and that religious people, even if you limit that group to Christians, actually disagree about a lot of stuff. I'm not sure why a nonbeliever like me seems to understand this more than the various religious political consultants.

Which is yet another argument; and might be a more persuasive one, except that Dobson is responding to a speech Obama gave in 2006 at a Call to Renewal conference. I suppose one could argue that Obama is a politician, and therefore everything he says is political, and he's called on to say it in public at conferences like that only because he's a politician, but then what do you do with the Berrigan brothers or Martin Luther King, Jr.? Unless we are going to establish a religious test for public office which declares that you cannot publicly speak of your religion once you accept public office, there's not a lot we can do about politicians making such speeches.

I don't think we want to go there. Besides, I sort of like any excuse for these words:

James Dobson doesn't speak for me.

He doesn't speak for me when he uses religion as a wedge to divide;

He doesn't speak for me when he speaks as the final arbiter on the meaning of the Bible;

James Dobson doesn't speak for me when he uses the beliefs of others as a line of attack;

He doesn't speak for me when he denigrates his neighbor's views when they don't line up with his;

He doesn't speak for me when he seeks to confine the values of my faith to two or three issues alone;

What does speak for me is David's psalm celebrating how good and pleasant it is when we come together in unity;

Micah speaks for me in reminding us that the Lord requires us to act justly, to love mercy and to walk humbly with Him;

The prophet Isaiah speaks for me in his call for all to come and reason together and also to seek justice, encourage the oppressed and to defend the cause of the vulnerable;

The book of Nehemiah speaks for me in its example to work with our neighbors, not against them, to restore what was broken in our communities;

The book of Matthew speaks for me in saying to bless those that curse you and pray for those who persecute you;

The words of the apostle Paul speak for me in saying that words spoken and deeds done without love amount to nothing.

The apostle John speaks for me in reminding us of Jesus' command to love one another. The world will know His disciples by that love.

The problem with responding to someone like James Dobson, of course, is that you then have to use religion "as a wedge to divide." I'd rather contemplate the wisdom and simple truth behind Micah's famous answer to his famous question, than see it used as a club to beat up someone you disagree with. Thus does scripture quickly become "words spoken and deeds done without love [which] amount to nothing."

But still, it is nice to see Dobson confronted with a man who learned his hermeneutic from a Black Liberation theologian and the church that theologian pastored for over three decades, the church many have caricatured (as I heard Kinky Friedman do it one night) as that "crazy church." And to realize Dobson is doing it in response to a speech that is 2 years old; and that his best response is:

"I think he's deliberately distorting the traditional understanding of the Bible to fit his own worldview, his own confused theology... He is dragging biblical understanding through the gutter."

Yeah, Dr. Dobson; that's letting him have it!

This is an old, old argument, of course. This is the root of fundamentalism exposed, the reaction to the new hermeneutics of Biblical interpretation first presented by German scholars in the 19th century. It's instructive that this is the best Dobson can do: to call Obama's theology "confused" and to declare Obama is trying to fit the Bible to "his worldview," as if Dobson didn't have a competing worldview he sees the Bible through. That's the nub of the problem, in fact: we all have competing worldviews, and the Bible has never been the tool that removes those lenses. If it were, we wouldn't have Judaism and Christianity today, nor all the flavors of both religions which abound on this planet. It isn't "post-modernism" or "moral relativism" nor even the legacy of Rene Descartes to say that: it's a fact as simple and obvious as sunrise.

Dobson's last redoubt is to have a spokesman explain that: "Without question, Dr. Dobson is speaking for millions of evangelicals because his understanding of the Bible is thoroughly evangelical." Well, fine, but even that doesn't appoint him the spokesperson for "millions of evangelicals," as there is no more a "thoroughly evangelical" Biblical hermeneutic than there is an "evangelical" Pope. One of the central tenets of Protestantism is that there is no one person authorized to speak on behalf of an entire denomination of designation of believers. This is one of the problems the Anglican Communion is struggling so fiercely with right now. And maybe the best thing about this controversy, is that Dr. Dobson (who is not a pastor, either by position or training) no longer wields quite the papal authority he had aspired to.

Which was an inevitable crash; it's just interesting that it came at the hands of a student of a Black Liberation theologian who is also a fiercely compassionate and fiery speaker. Perhaps this should be remembered as part of Rev. Wright's legacy. It won't be, at least not publicly; but that's alright, too. History is made by many such anonymous servants of the Lord.