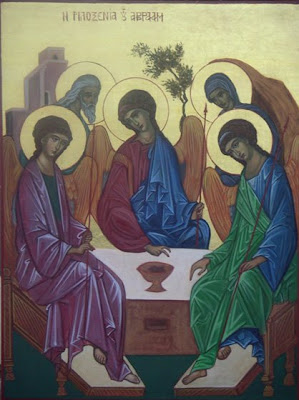 Coming back to this, I saw this at Wounded Bird, which sent me to this at Fr. Jake's, which made me think about this, from the same flysheet mentioned earlier:

"The consistently dominant figure here is Abraham: certainly he who, above all, received the three men who were God's envoys at the Oak of Mambre, and gave them hospitality, thereby inaugurating a whole tradition."

It is worth pointing out that is just after that visit that Abraham talks God out of destroying Sodom and Gomorrah the first time; and that the sin of Sodom was not the sexual act which was given its name, but the inhospitality shown to travelers there. That was the last straw in God's book, for them.

And yet hospitality is one of the least important aspects of our Christian community. Odd, isn't it?

Right. I seem to recall I was on a lunch break....