Faith AND Reason. And Compassion. 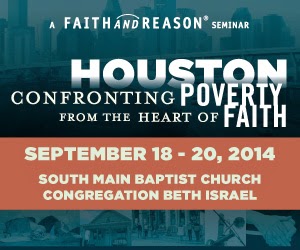 I blame myself, first.  This seminar was held in Houston over the weekend, and I found out about it after it was over.*

I don't blame the organizers, because I know they didn't have money to spend on radio ads I wouldn't hear (I only listen to NPR) or TV ads I wouldn't see (most of the local TV I watch is spotted with ads for plaintiff's lawyers and help for seniors who fall down).  I do find it odd there was no mention of it on the local NPR station, no reference to it on the daily local NPR show that concerns itself with what's going on in town.  I did, for example, know that Reza Aslan was here on Thursday, to speak at Christ Church Cathedral about his book I didn't think much of.

I didn't know this list of luminaries was going to gather to address problems of poverty from a religious perspective.  Coincidentally (or not), I picked up Dom Crossan's latest work (AFAIK) about the "Our Father," and was reading the chapter on God as householder.  Crossan makes the point, using copious Biblical references and close readings of texts (his specialty), that God is presented in the prayer and in the tradition as the Householder of the world, and what householder (patriarch, if you prefer, but Crossan is more inclusive in his vision, as are the Scriptures) would allow some members of the house to starve while others have too much to eat?  Would let some members of the house live in luxury while others slept in dirt and filth?

It's a powerful image.  I wonder if he brought it up at this conference.  I'd like to think he did.  I like to think there was a great deal said about how they belong to us and we belong to them because, as Crossan might say, this is God's household, and we all live in it.

Well, I could rail about the disinterest of the local news groups who trumpet every cultural event and best-selling author, but ignore something as important as this.  Then again, if more of us thought it was important, or made it clear how important it is, these issues might get the attention they deserve.  And that may yet happen.

After I wrote the above and then shelved it for later, I came across this article at TPM, which ends on a rather optimistic note.  Rather than publish two interrelated posts that might seem repetitious, I decided to bang them together.  The TPM article is about changes being wrought, even in America, by Pope Francis on the Catholic church.  The tenor of the argument is captured in this optimistic conclusion:

This is all good news not only for Catholic progressives in the pews who have felt left out in the cold during several decades of conservative dominance in the church. A revitalized Catholic voice in public life just might also help jumpstart a better political debate in Washington.

The argument of the article is simple:  Francis emphasizes "humility, mercy and social justice [and] offer[s] a vivid contrast to a vocal minority of U.S. Christian leaders who only see dark clouds and battles to fight. Think of it as the joy of the Gospel v. culture war Christianity fight."  Notice how inclusive the argument is there.  Most of the references are to Catholic Bishops and positions on issues that will change as the new Pope replaces allies of John Paul II with new faces; but here the line is drawn between the new Pope and "U.S. Christian leaders."

I would only add that the "leaders" referred to in that phrase are a minority of U.S. Christians or U.S. Christian leaders.  Now that gay and lesbian bishops are no longer a front page issue in the Anglican Communion the woman who is the Presiding Bishop of the Episcopal Church can't get invited to a local news interview (she is, to my knowledge, a rare thing still in church circles:  a woman presiding over a mainline denomination).  When was the last time we saw the heads of the UCC, or the Evangelical Lutheran Church, the United Methodist Church, or the Presbyterian Church, either asked for an opinion by a reporter, or invited to a Sunday morning talk show?  Marc Driscoll headed up 15 churches, but he gets more attention than the head of the UCC, who represents over 5000 congregations (and is still one of the smallest of the "mainline" denominations).  Even the President of the Southern Baptist Convention doesn't get as much media attention as Rick Warren or Joel Osteen. Of course the latter haven't been involved in a church scandal or written a best-seller lately, so we don't hear much from them in the press, either.

Is there a bias there similar to the one that treats GOP positions as normative in political coverage?

Will the conversation in the Catholic church change, and will that change be felt in our political discourse?  Given my sympathies for social justice issues, I certainly hope so.  We can use all the help we can get.  We could especially use a bit more awareness that there are "U.S. Christian leaders" who are not right-wing Calvinist cranks or only interested in "dark clouds and battles to fight."  If Pope Francis can change that one of the public conversation, he will have done God's work indeed.

It seems there are reasons to say the kingdom of God is among us!

*And why Texas?  Second most populous state in the union, 1 in 6 Texans live in poverty.  I've seen first hand what the Southern Baptist churches can do when they put their minds to it; but this mostly Baptist state is doing nothing about this poverty problem.  Certainly nothing at the governmental level, anyway.