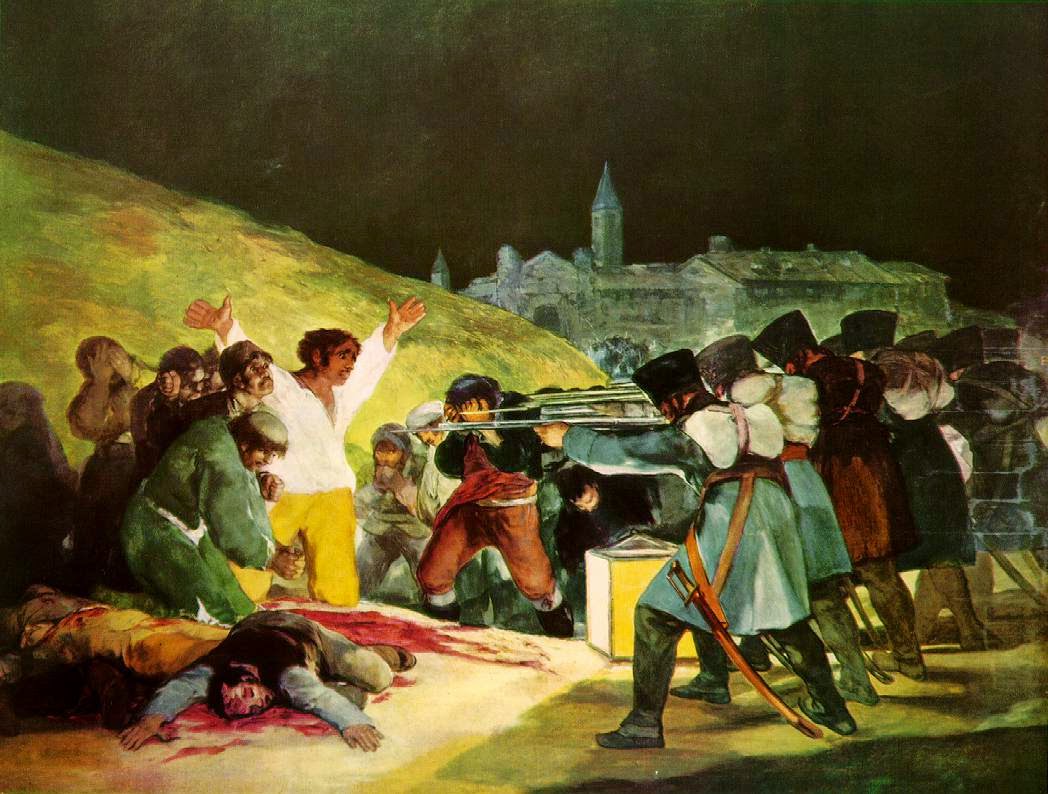 Part of the ugliness of the internet is that you see, not the "suffering humanity" of Goya's greatest scenes, but the grotesque inhumanity of individuals.

Case in point: this article at Salon, a very thoughtful and nuanced discussion of raising a child with trisomy 21 (after reading it, I don't even like to use the label "Down syndrome" anymore), couched in the context of the last Twitter firestorm Richard Dawkins set off (for which, as is pointed out here, he never really apologized.)  Most of the commentary argues that the world is better off without children born with trisomy 21, and that's why so many women are aborting fetuses where the syndrome is detected in utero.

I don't know that that is true, but I am skeptical of the claim.  Whether it is true or not is irrelevant, because it means most pregnant women are actually quite comfortable in Omelas, and would rather abort a child and replace it with another, than consider that child a unique human being.  The question of choosing abortion is not on the table here; the question is, why give birth to a child with a condition like trisomy 21?  And the bulk of the conclusions seems to be:  because it's damned inconvenient, which was Dawkins' argument.  The article at Salon provides a rejoinder to that assumption; but the ugliness is that the assumption is so deeply rooted few people commenting on the article take note of that.

They know what they know, and no facts are going to disturb their knowledge.

The short version of the article is:  ethics is far more complicated than Dawkins imagines, and "logic" is not the stuff Mr. Spock uses to be unemotional and so reach a better conclusion than emotional humans.  For example:

In the apology Dawkins says, “Given a free choice of having an early abortion or deliberately bringing a Down child into the world, I think the moral and sensible choice would be to abort…I personally would go further and say that, if your morality is based, as mine is, on a desire to increase the sum of happiness and reduce suffering, the decision to deliberately give birth to a Down baby, when you have the choice to abort it early in the pregnancy, might actually be immoral from the point of view of the child’s own welfare….Having said that, the choice would be entirely yours and I would never dream of trying to impose my views on you or anyone else.”

Dawkins’ belief that we should maximize happiness and minimize suffering seems to be a moral theory known as “act-utilitarianism.” For an act-utilitarian, an action’s morality can, in theory, be demonstrated empirically. To discover if an act is moral or immoral, you simply measure the amount of happiness or suffering it causes. The more suffering an act causes, the more immoral it is; the more happiness an act causes, the more moral it is.

"Seems to be" is the telling phrase there, because Dawkins doesn't really have a coherent ethic here; rather like Potter Stewart's definition of pornography, Dawkins seems to know what's ethical when he sees it.  But the question of "amount of suffering" raises a critical point:  whose suffering are we considering?  The individual's?  The family's?  Society's?  The world?

Lest you think I exaggerate:


When you really try to understand what Dawkins is saying in his apology, however, you realize that his thoughts are not even fully coherent. He says that continuing the pregnancy is immoral because the child would better be off if she had never been born—but he provides no evidence for this, and it’s flat-out implausible that Down syndrome renders a life so wretched that it’s not worth living. Earlier in the same sentence Dawkins says he believes morality is based on increasing “the sum of happiness,” which presumably means the sum of everyone’s happiness. That is, an action is immoral when it makes the entire world worse off. If that’s true, and he has stated he thinks it’s immoral knowingly to give birth to someone with Down syndrome, does he think the mere presence of people with Down syndrome increases suffering in the world?

If you read the comments at Salon (and I don't advise it), you'll find that it is actually considered quite plausible that "Down syndrome renders a life so wretched that it's not worth living."  Which is precisely what the Salon article is countering, although to no avail with the crowd that knows what it knows and doesn't need to know anything else.  There, however, is Dawkins' argument in a nutshell:  the happiness of the world is diminished because of one child with trisomy 21, so it is immoral to give birth to such children.*

And apparently no small number of people are okay with that.  Which is kind of disgusting; not to mention wildly immature, since the first response to that kind of thinking is:  "The world doesn't revolve around you."

Dawkins, and a lot of the comments at Salon, justify the decision to abort a fetus with trisomy 21 on the grounds that everybody who is pro-choice (and so will have an abortion, if they choose) will decide to abort such a fetus.  Which is another monstrous display of self-centeredness:

It is...possible for someone to be pro-choice and think abortion is generally permissible, but not for certain reasons. He or she may think it immoral to terminate if the decision was based on the fact that a fetus was discovered to be gay, or predisposed to obesity, or dark-skinned, or female. Or disabled. Indeed, Dawkins is so far from the ordinary pro-choice stance that there is no major bioethicist or philosopher who would agree—without far more caveats than Dawkins provides—that the “moral and sensible” thing to do is abort if a fetus is diagnosed with Down syndrome.

I suppose Dawkins, or his supporters, would qualify the decision to abort based on genetic characteristics, to Down syndrome v. being gay, or female, or dark-skinned, on the grounds that the latter don't detract from the sum of the world's happiness, but trisomy 21 does.  Which, of course, is defensible:  if you have no ethics at all.

As for the misery of trisomy 21, perhaps we should ask the people involved:

Among 2,044 parents or guardians surveyed, 79 percent reported their outlook on life was more positive because of their child with Down syndrome…

But they aren't increasing the sum of Richard Dawkins' imagined happiness, nor of his acolytes, so clearly they are wrong.  And regarding that reference to Mr. Spock earlier:

Among the people who, according to Dawkins, have misunderstood Dawkins, are “those who took offence because they know and love a person with Down Syndrome, and who thought I was saying that their loved one had no right to exist. I have sympathy for this emotional point, but it is an emotional one not a logical one.” Apparently, he thinks people who love someone with Down syndrome simply must be clouded by sentiment, and unable to see reason. But for an act-utilitarian, the emotions of those who know and love people with Down syndrome are not muddying the issue; on the contrary, they are crucial data points. These people are telling him what for some reason he does not seem to want to hear: that their happiness is increased with someone with Down syndrome in the world.

The gravest error in employing "logic" is in assuming logic invariably leads to truth, when logic itself makes no such claim.  Logic, properly employed, will eliminate error in reasoning; but it does not speak to the validity of the information employed.  The old syllogism that:  "All humans are mortal, Socrates is human, therefore Socrates is mortal" is a valid conclusion, but it is as valid as "1+1=2."  The numbers there are merely symbols, they are not statements of immutable fact (and are only valid in certain contexts.  In biology, 1+1=3, at a minimum, unless the female devours the male after copulation.  But in those cases 1+1 usually equals something in double or even triple digits.).  The syllogism doesn't prove that humans are mortal, or that Socrates is human; it simply establishes a valid conclusion from the words that might as well be symbols themselves (and in symbolic logic are merely symbols).  The reasoning may be sound, but is the outcome true?  Logic cannot speak to that.  And if emotions are crucial data points Dawkins simply wants to discard on the way to his conclusion, then what good is this intelligence Dawkins supposedly has?

And besides, Dawkins employs no such logic at all.  His ethics are incoherent and inconsistent.  He would undoubtedly argue that a female child does not subtract from the world's sum of happiness, but if that child is born into a culture which is barbaric to women, is the mother wrong to weep for the suffering she fears her daughter will undergo?  Would we consider that valid grounds for abortion in that culture?  Probably not, but are we any less barbaric because we consider children with trisomy 21 too much trouble to bother with?  Where, exactly, is the distinction in this ethical system Dawkins proposes?

None of this stops Dawkins' ardent supporters from saying he's right because, well, some people have no reason to live, and they know who they are.

*Conversely, if the misery of one child will make everyone else happy, Dawkins would be fine as mayor for life of Omelas.
Posted by Rmj at 10:13 AM