Why does Texas want to criminalize bad judgment? 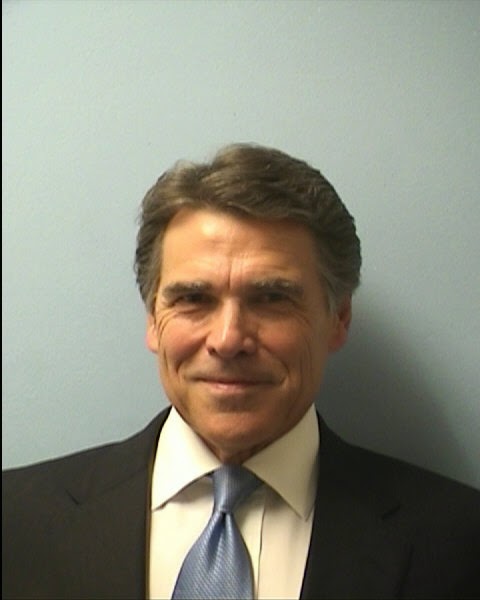 Gubernatorial mugshot:  Another reason to a proud Texan

I'm not sure how I missed this, but since I've taken to reporting on all things Rick Perry and his indictment, let me use this to point out the people in Texas take this matter far more seriously than Michael Lind or Jonathan Chait or the New York Times.

Per Burnt Orange Report, I learn via the Austin American Statesman that:

Judge Julie Kocurek of the 390th District Court, a Democrat, said Perry's Saturday statement, issued a day after the indictment, could be construed as a threat and possible violation of the law. Kocurek, as the administrative presiding judge of all criminal courts in the county, said that "no one is above the law," and the public needs to know that grand jurors are legally protected from any threat.

"I have a duty to make sure that our members of the grand jury are protected," Kocurek said. "I am defending the integrity of our grand jury system."

The judge said that Perry might have made a veiled threat when he said: "I am confident we will ultimately prevail, that this farce of a prosecution will be revealed for what it is, and that those responsible will be held to account."

The only people that Perry could be referring to as being accountable are the grand jurors, judge and prosecutor, Kocurek said.

The Texas Penal Code that outlaws obstruction and retaliation says that anyone who "intentionally or knowingly harms or threatens to harm" a grand juror faces a second degree felony, which is punishable by up to 20 years in prison.

If you get the impression some of us down here in the Lone Star State think Gov. Goodhair has been in office too long and, as we say, gotten too big for his britches, congratulations:  you're starting to pay attention.  I guess in Perry's defense we could say he didn't know what he was saying, so he didn't do anything "intentionally or knowingly" to "threaten to harm" a grand juror.  Which means he doesn't even understand the words coming out of his mouth, but hey, at least we wouldn't be criminalizing bad judgment, right?

As BOR points out (the news article is behind a paywall), the grand jury members are offended, too.  They have good reason:  I've never heard a Governor of Texas speak this way; or think he had reason to.

But maybe we should all listen to the people with no involvement in this story for lessons on how to behave, huh?
Posted by Rmj at 2:07 PM