Some bad judgment is not criminal; but should be..... 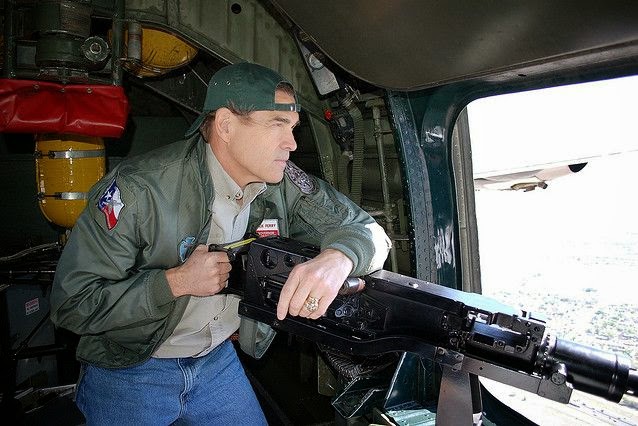 I have to advertise this, if only because of the picture.

At $17 million a month Perry has not even set an end date or rough estimate for how long the surge will last. Perry was able to make the decision unilaterally with some funds that were left to his discretion so it seems like paying the troops would have been a top priority.

The troops were deployed on August 11th but are not expected to be paid until September 5th. Food Bank RGV Executive Director Terri Drefke told Valley Central, "We were contacted that 50 troops that are in the Valley don't have any money for food and gas and they need our assistance."
....

State Sen. Wendy Davis will be in the Valley on Saturday to help deliver food to the for the National Guard. She said in a statement: "It's disgraceful that the men and women of our National Guard deployed to protect our border are forced to go to food banks...Whether you agree that we need the National Guard or the additional deputy sheriffs that I have previously called for to secure the border, it is shameful that our troops would be sent to keep us safe without basic supplies like food."

It was widely reported that the deployed troops would not be able to engage, detain or even question the immigration status of individuals they encountered along the border leaving many to question the purpose of the move altogether. With these new reporters and the fact that the numbers of immigrants arriving at the border has slowed tremendously this now appears to be a huge debacle for the outgoing Governor.


And the costs aren't limited to the guardsmen:

“Assuming [the deployment] lasts about a year,” Perryman says, “it would be about $541 million, a little over half a billion dollars in gross product [lost] in the local area down there and about 7,800 jobs. The losses to the state as a whole would be a bit bigger because of spillover effects, about $650 million in output and about 8,700 jobs.”


But it's South Texas, still the Democratic stronghold of the state, so who cares, right?

Does no one wonder why Perry is not running again?  Besides the fact he's clearly dumb as a box of rocks?