Airing out the welcome mat 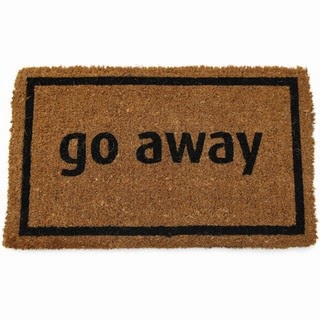 I had one similar to this outside my dorm room in college.  Could it be we Christians who have acted as if this was our sentiment de facto, if not de jure, might start throwing our personal mats away?

I haven't much to say about the pronouncement coming out of the synod in Rome just now, except to note there's another week to go and let's wait and see what else is said (will the other shoe drop, in other words).  I'm sure Fr. Martin is right, and "This is a stunning change in the way the Catholic church speaks of gay people."  I hope he's also right, and it means "The Synod is clearly listening to the complex, real-life experiences of Catholics around the world, and seeking to address them with mercy, as Jesus did."

That's the interpretation going around, and it's a very hopeful one.  This Pope is making a pastoral effort in the church, at a time when pastoral efforts are needed in the world.  So I am hopeful.

I'm also interested, because the statement from the Synod:

"Homosexuals have gifts and qualities to offer the Christian community: are we capable of welcoming these people, guaranteeing to them a further space in our communities? Often they wish to encounter a Church that offers them a welcoming home," said the document, known by its Latin name "relate".

"Are our communities capable of proving that, accepting and valuing their sexual orientation, without compromising Catholic doctrine on the family and matrimony?" it asked.

Echoes my own concerns in theology as a pastoral effort; the centrality of the idea of hospitality. No, I'm not congratulating myself.  I'm intrigued that this idea is becoming a focal point of institutional pastoral interest by the church.  When I was in seminary the focus was on "community," so my attention to hospitality not a credit to me, but to my teachers.  As I read this statement from the Synod, I'm fully in accord with it.  As they clarify their position over the next week, I'll pay attention.

But it is clear to me, in this day and age at least, hospitality is the key to Christian community,  Christian life, and the Christian gospel.  This new language, inasmuch as it at least marks a change in emphasis, is a good thing.  It could also be interesting.
Posted by Rmj at 2:51 PM