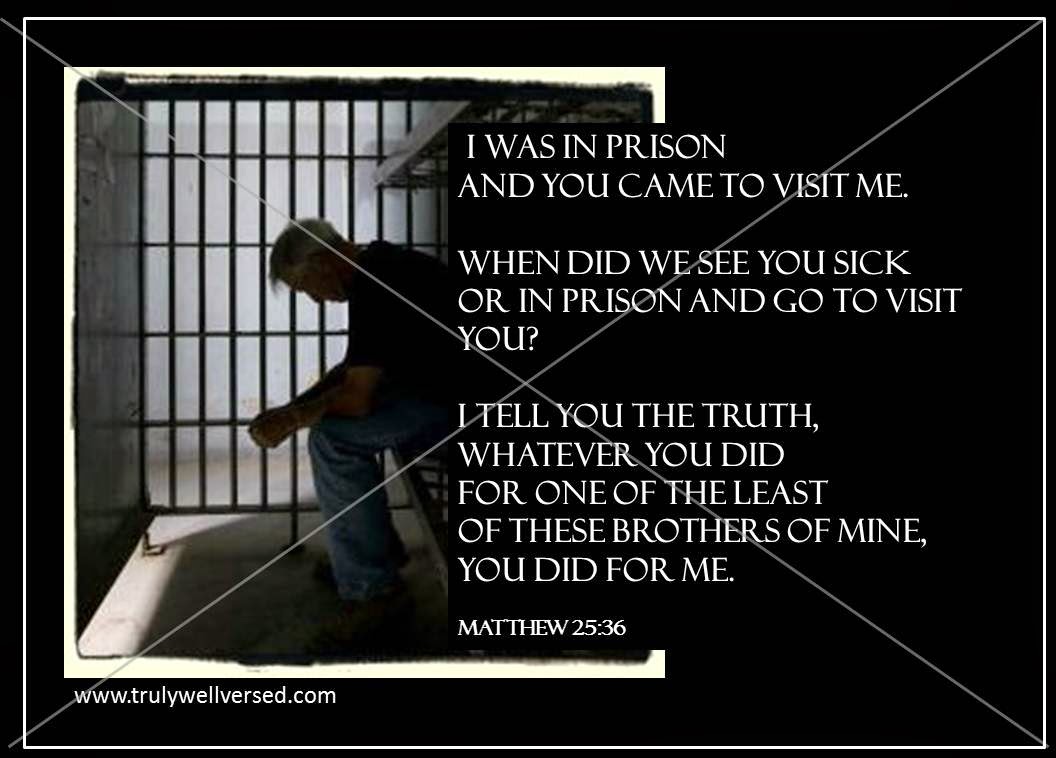 I grew up in Sunday school thinking the Romans were really cruel and jailed people without due process and for no good reason, and it was probably a really nice thing that Jesus told his followers then to visit people in jail because that's where Jesus was, too.  Not, of course, that I ever visited anybody in jail.  Who did I know in jail?

It was many years before I began to consider why people are in jail in the first place:

Because homeless people are on the streets, in public view all the time, they are more exposed to surveillance by the police, to surveillance by other community members who might call the police. Behavior that’s completely innocent, that you or I take for granted — eating, going to the bathroom, all these things that are perfectly legal when done in a private setting — become criminal acts in public. Every time that kind of act is criminalized, it invites an interaction with the police that wouldn’t otherwise happen.

A small slice of an example of "what is a criminal act, and why."  Yes, urinating or defecating in public is both disgusting and unhygienic.  But then when we maintain no public restroom facilities in our cities, and no public housing either (not enough to deal with the homeless problem; don't strain at gnats and swallow camels here), do we make public urination a crime so we can solve a problem?  Or so we can punish people for being poor?  And then, of course, there are the cities that want to rigidly control where food is distributed because it bothers business, and as the sage lyricist said:  "It's money that matters/in the U.S.A."

And if you have a mental illness, well, then, the socially responsible thing to do is to shoot you; unless you live in San Antonio, Texas.

But what does criminalization of minor acts necessitated by poverty have to do with continuing poverty?  A great deal, it turns out:

There are statistics showing that 40 percent of homeless people work in any given month. For a significant population of homeless people, they are working; it’s not that they can’t or won’t or don’t want to work, but that they are simply working but aren’t able to save up enough to make their first and last month’s rent, security deposit or those sorts of things, especially in cities where the cost of living has gone up.

When you combine that with criminalization practices … we’ve seen a number of situations where people are on the cusp of getting housing and then all of a sudden they’re arrested for no good reason, they spend a night in jail, they aren’t able to go to their job the next day, they lose their job, and then they’re back at square one. Plus, they now have a criminal record, which makes it more difficult for them to get employment and access to housing or other services, so it’s actually putting further barriers between the people who are actively trying to get out of homelessness and their ability to do so.


Or, as Nanci Griffith said (another sage lyricist):  just a bank account away from America.

Can we even spare the time?

We can't even afford that, of course.  Texas politicians complain about the rising cost of Medicaid, even as they refuse to expand Medicaid under the Affordable Care Act.  On the other hand, the outgoing head of the Federal Reserve Bank of Dallas said the Texas GNP was higher than that of the entire country of Canada.  Oddly, Canada can afford universal health care coverage, and probably does a better job of taking care of its homeless than Texas does.  We have the money; we just don't want to spend it on people.

People, you see, are too damned expensive.

Do you have a dime?

It really is about who we are as Americans. On the Statue of Liberty, the plaque reads, give me your tired, your poor, your huddled masses. Send the homeless to me, I lift my lamp beside the golden door, but now we’re saying don’t send me your homeless. Even the homeless that are already here, we’re not lifting our lamp beside the golden door, we’re lifting our police baton beside the gilded gates of a gated community. It’s a different concept of who we should be, as Americans. I think we need to return to our best ideals, rather than the worst nightmares that we are becoming.