"Whatever you say bounces off me and sticks to you!"

White House just blasted out ⁦@NoahRFeldman⁩’s op-ed: “If the articles are not transmitted, Trump could legitimately say that he wasn’t truly impeached at all.” https://t.co/ibk9HlanpK
— Jacqueline Alemany (@JaxAlemany) December 20, 2019

The impotence of the White House is exposed.  Trump is impeached:  end of discussion.  Need I restate the Constitution on this point?

The House of Representatives shall chuse their Speaker and other Officers;and shall have the sole Power of Impeachment.

And then there's Nixon v. U.S., which calls such language "a constitutional commitment of the issue to a coordinate political department."  Which means the Constitution means what it says:  "the House of Representatives....shall have the sole Power of Impeachment."

.@NoahRFeldman is making a clever but wholly mistaken point when he says Trump hasn’t “really” been impeached until the Articles reach the Senate. Under Art. I, Sec. 2, Clause 5, he was impeached on Dec 18, 2019. He will forever remain impeached. Period. https://t.co/FkwTNG5fiV
— Laurence Tribe (@tribelaw) December 20, 2019

Nice of you to compliment my book, @NoahRFeldman, but what you call impeachment’s “core” mistakes a part for the whole, a classic logical and, in this case, textual error. Had Nixon resigned right after rather than before the House impeached him, surely he’d’ve been “impeached.” https://t.co/hUPop5haA4
— Laurence Tribe (@tribelaw) December 20, 2019

Fun to keep this going, @NoahRFeldman, and I do respect you greatly, but I still disagree — and this academic dispute will soon become moot. If it doesn’t, let’s resume. Till then, I want maximum moral pressure on McConnell. https://t.co/EzrKBoxi8h
— Laurence Tribe (@tribelaw) December 20, 2019

Nothing wrong with that.

As I say, the plain language of Art. 1 speaks plainly to this issue.  "Sole power" means "sole power."  And at least Professor Feldman doesn't go off the edge of the known world like Alan Dershowitz did (and note where Dershowitz published his opinion):

Neither @SpeakerPelosi nor I have proposed what @AlanDersh oddly attributes to us — withholding the Articles of Impeachment until a Democratic Senate is elected (or perhaps forever). That could well be an unconstitutional Bill of Attainder. So what?https://t.co/BarphYe8Q8
— Laurence Tribe (@tribelaw) December 20, 2019 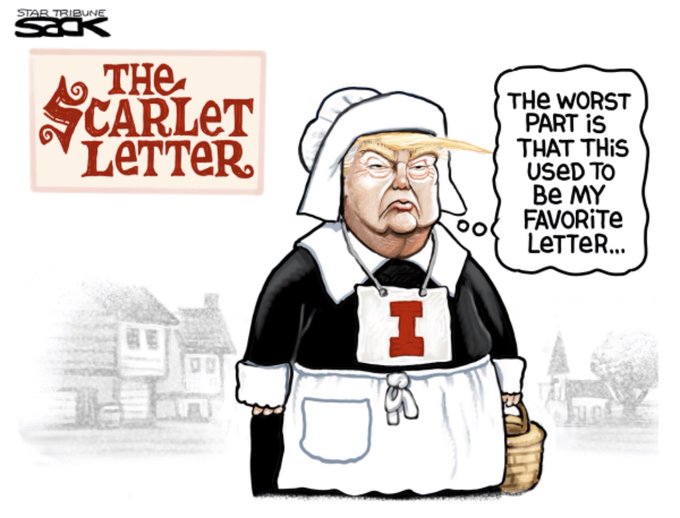 BTW: Feldman is not saying what the White House says he is saying, nor even what he thinks he's saying:

The Constitution doesn’t say how fast the articles must go to the Senate. Some modest delay is not inconsistent with the Constitution, or how both chambers usually work.

But an indefinite delay would pose a serious problem. Impeachment as contemplated by the Constitution does not consist merely of the vote by the House, but of the process of sending the articles to the Senate for trial. Both parts are necessary to make an impeachment under the Constitution: The House must actually send the articles and send managers to the Senate to prosecute the impeachment. And the Senate must actually hold a trial.


An "indefinite delay" would, I agree, pose a serious problem.  When that happens, let me know.  I'm old enough to remember Kevin McCarthy complaining that the vote to impeach was happening "hours before Christmas."  If Pelosi chooses not to force the Senate to begin the trial (which under Senate rule MUST begin when articles are delivered) until after Christmas, what harm is that?  The lesson I have never unlearned from law school is:  "Change the facts, change the outcome."  The response of a judge to Feldman's argument in those two paragraphs would be:  "But counselor:  is that the situation before us today?"  The answer is:  no, it is not.  And arguments in law based on "what if's" are empty arguments worth the paper, especially in this case, they are printed on.  Especially when "Some modest delay is not inconsistent with the Constitution, or how both chambers usually work."  As I say, the White House is exposing its impotence on this issue, not its leverage.
Posted by Rmj at 2:44 PM