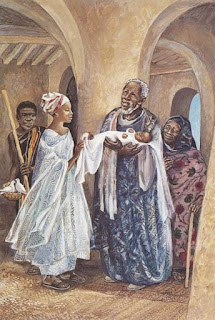 
Just looking at the song of Simeon again. It usually happens that, when taken out of context and reviewed for some reason other than exegesis, the exegesis is clearer and easier.  First, we blame the gospels, and not wrongly, for much of the anti-semitism of European history.  But look at those final lines:  it is a sentiment completely in keeping with the visions of Isaiah regarding the future of Israel from the midst of Exile in Babylon.  The vision of the Holy Mountain in Isaiah 40 is meant to be a vision of Israel in its apotheosis as the people of God, a condition which draws the nations (i.e., people, not nation-states) to it to share in and learn from this blessing.  Simeon echoes that:

a light that will bring revelation to the Gentiles/and glory to your people Israel.


By the time Luke wrote Christians had already mined the scriptures for references to their Messiah, so the idea is not original with Luke.  But part of the anti-semitism that would infect the church and the culture came from reading those scriptures as signs the Jews missed, and so brought their damnation on themselves.  Here is a sad example of how badly the gospels were misused, and how they have been more recently put right:  the vision of Simeon is whole, and should be seen as whole sight (or all the rest truly is desolation):  it is a vision of Hebrew and Christian, Gentile and Jew, drawing from the same source for revelation and glory.

And then Luke continues the story:


The "sign that shall be spoken against" (and I want to stop there and look up Luke's words, to see if he uses the word John uses for "miracles."  John doesn't use the dunamis of the other gospel writers, which should be directly translated as "act of power."  John's gospel uses semeia, which means "signs."  It's part of my own argument that, as Mark's gospel instructed Matthew's, and Q gave material to Matthew and Luke, John's gospel shows unmistakeable signs of Luke as forebear.  But I put this in a long note to remind myself to return to it someday.) is what piques my interest.   Why?  Because that sign which will "be spoken against" will then, by the action of rejection, "reveal the thoughts of many hearts."  And suddenly we're back to Jeremiah:

The heart is devious above all else; it is perverse--
who can understand it?
I the LORD test the mind
and search the heart,
to give to all according to their ways,
according to the fruit of their doings.

Modern scholarship tends to emphasize the errors in Temple practice and religious ritual that Luke makes, which marks the gospel's author as a Gentile.  That may be true, but Luke is the subtlest theologian in the four gospels.  And it is that "set against" that is so revealing, if only because the sign provokes the response of rejection; and why does one object?

An argument reveals as much, and often more, about the person raising the argument, than the points of the argument itself.  Simeon's words appear to establish the very "either/or" that Kierkegaard wrote about as the fundamental position of the ethical.  And yet Kierkegaard meant that analysis as the limited view of the non-religious, not as the final word on what is ethically condoned or condemned.  But Simeon doesn't say the cosmic scales will be held by Jesus, and many will be weighed and found wanting.  Simeon says the thoughts of many hearts will be revealed.  The innermost thoughts; the truest thoughts; of these there will be a revelation, and that revelation will come through the sign brought by Jesus.  And what is a sign?  According to semiotic theory, it is something which points to something else.  What does Jesus point to, according to Simeon, except the truth?

My soul extols the Lord, and my spirit rejoices in God my Savior, for he has shown consideration for the lowly stature of his slave. As a consequence, from now on every generation will congratulate me; the Mighty One has done great things for me, and holy is his name, and his mercy will come to generation after generation of those who fear him. He has shown the strength of his arm, he has put the arrogant to rout, along with their private schemes; he has pulled the mighty down from their thrones, and exalted the lowly; he has filled the hungry with good things, and sent the rich away empty. He has come to the aid of his servant Israel, remembering his mercy, as he spoke to our ancestors, to Abraham and to his descendants forever.

Right there, almost in the middle:

He has shown the strength of his arm, he has put the arrogant to rout, along with their private schemes; he has pulled the mighty down from their thrones, and exalted the lowly; he has filled the hungry with good things, and sent the rich away empty.

That sounds, at least to the rich, more like a prophet than a priest:

1:15 That day will be a day of wrath, a day of distress and anguish, a day of ruin and devastation, a day of darkness and gloom, a day of clouds and thick darkness,

1:16 a day of trumpet blast and battle cry against the fortified cities and against the lofty battlements.

The revelation of God is never a judgment from a spiteful god; it is always a judgment brought on the people who have turned away from God, and now reap the whirlwind they have sown.  And the revelation of Jesus Simeon speaks of will be to some like a sword, revealing their metaphorical hearts.  They will be revealed for who they truly are and judged, not by a tribunal of superiors, but by their own actions:  "to give to all according to their ways, according to the fruit of their doings."

A dark day, indeed, if we all are treated as we deserve.  Maybe a real sword would be better.  And yet Simeon promises, not a judgment, but merely a revelation.

Which, when you think about it, might be bad enough.  But it offers an interesting perspective for insight; especially into our own hearts.