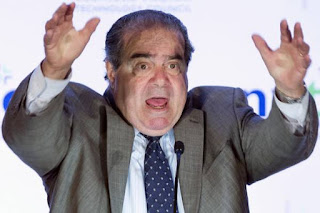 All I have to say is, I heard arguments like this in my childhood, especially before the public schools I attended were integrated (which happened in 1970 16 years after Brown v. Board was handed down.  When I got to Austin 8 years later, they were still fighting over it.  And then there was the fight in Boston....).  The argument against integration was that "the blacks" wouldn't like white schools, and wouldn't do well in them, and wouldn't be happy there, and were better off in "their own schools" with "their own teachers."

It wouldn't, you see, be a good thing for the "white schools" to admit as many blacks as possible.

And then, of course, we did.

I never thought, in my entire life, I'd hear that blatantly racist argument uttered again, certainly not in the courtroom of the highest court of the land.

Maybe I was wrong about the impact of Donald Trump.......