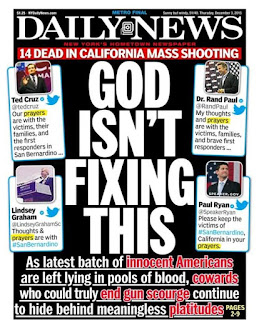 The news now is that only two shooters were involved, and they are both dead.  The shooting had nothing to do with the facility, but with a holiday party being conducted by the San Bernardino Dept. of Public Health which rented a room there for the party.  The shooters were employees of the Dept. (or at least one of them was).

This is the 355th such shooting in a year that is only 336 days old.  And the answers of our would-be leaders is empty platitudes which would make the most timorous pastor blush with shame.  Pastors are sometimes forced to deal in platitudes because they have no real power to effect events, to assuage the pain of death, the sorrow of sudden loss.  Politicians deal in platitudes as a way of escaping responsibility, because whatever authority they have, they won't use it.

And, sadly, we, the great American public, won't make them use it.