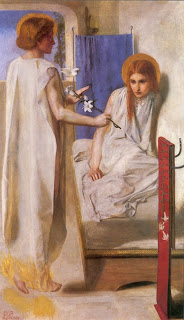 This is a good place to start a consideration of Mary; especially as last Sunday was Gaudete, the observance of the visit of Gabriel to Mary during Advent.

There are a couple of minor problems here:  one, Gabriel doesn't say "Hail, Mary, full of grace," at least not in the original Greek.  It can be translated that way, but the original Greek translates much closer to "You have found favor with God."  I mention this because the post at the link argues "virgin" is not the best description of Mary, because:

The Greek word Luke uses for virgin is an unusual one, a very specific word that means she has not yet born a child. Its precise meaning does not indicate sexual innocence. So let’s be clear: the focus is on her uterus. The state of her hymen is not at issue here.

It's an anachronistic reading of the word, since a woman who has born a child has obviously known a man (the linch-pin of both nativity stories, as reflected in "The Cherry Tree Carol").   And I can't find any evidence the word is "unusual."  The point, for both Luke and Matthew, is that Jesus is born of woman but not of man.  It's the kind of thing that's kept theologians busy for centuries, trying from that slender reference to understand the nature of the Christ.

It's also anachronistic to aver that assuming Mary is under 16 makes God a pedophile (no, seriously, it's in the post).  The onset of menarche has greatly reduced in recent generations, and the very idea of a "teenager" dates back no earlier than the late 19th century (if that far).  People who were dead in their 40's (watch a TV show from 50 years ago, and look at the people identified as "old:"  you'll think they were in their 90's, when they are supposedly only in their '60's) didn't wait until they were 30 to have babies, and "pedophilia" was a term unknown for women of childbearing age.

But it's also a bit odd to parse a Greek word, but take for your exegesis a very traditional English translation of another part of the story.

Alright, nitpicking aside, we should pay more attention to the story of Mary, especially as it appears in the context of Luke's gospel.   Ne timeas, Maria, Gabriel says to her, according to the Vulgate.  "Do not be afraid," which serves as stark contrast to the first appearance of Gabriel in this gospel:  when he appears to Zechariah, the father of John the Baptist.  I'll let the Scholar's Version take over from here:

At the hour of incense, while a huge crowd was praying outside, there appeared to him a messenger of the Lord standing to the right of the altar of incense.  When he saw him, Zechariah was shaken and overcome by fear.  Luke 1:10-12, SV


We have to stop here and note Zechariah does not come off well, here.  He's a priest, and he's in the "sanctuary," an inner part of the temple, where he might expect to encounter God's presence.  And he's startled and fearful of an angel.  So the "heavenly messenger" (which is really how "angel" should be understood) is reassuring:

But the heavenly messenger said to him, "Don't be afraid, Zechariah, for your prayer has been heard, and your wife Elizabeth will bear you a son, and you are to name him John." Luke 1:13, SV


Pardon me while I skip to the end, because the heavenly messenger gives a lengthy peroration about how John will live (to prove his holiness) and how he will "make people ready for their lord."  It is the first advent, in other words; but let's not lose our focus now, because Zechariah is about to speak:

But Zechariah said to the heavenly messenger, "How can I be sure of this?  For I am an old man and my wife is all along in years."  Luke 1:18, SV


And how he can be sure of it is with a sign; he is struck dumb until the baby is born, and only when he writes down the baby's name can he speak again.  But that's getting ahead of the narrative.

So note what that priest does:  he is afraid, indeed overcome by fear.  He demands a sign from God (the heavenly messenger is a divine emissary; to speak to the angel is to speak to God), and he learns the lesson of "be careful what you ask for."

He also goes home after his service in the Temple is over, and gets his wife pregnant.  That part of the story is not to be overlooked.  And having been told that, the story shifts to this heavenly messenger's visit with Mary.

In the sixth month the heavenly messenger Gabriel was sent form God to a city in Galilee called Nazareth, to a virgin engaged to a man named Joseph, of the house of David.  The virgin's name was Mary.  He entered and said to her "Greetings, favored one.  The Lord is with you!"

But she was deeply disturbed by the words, and wondered what the greeting could mean.

The heavenly messenger said to her, "Don't be afraid, Mary, for you have found favor with God.  Listen to me:  you will conceive in your womb and give birth to a son, and you will name him Jesus.  He will be great, and will be called son of the Most High.  And the Lord God will give him the throne of David, his father.  He will rule over the house of Jacob forever; and his dominion will have no end."

And Mary said to the messenger, "How can this be, since I am not involved with a man?"

The messenger replied, "The holy spirit will come over you, and the power of the Most High will cast its shadow on you.  This is why the child to be born will be holy, and be called son of God.  Further, your relative Elizabeth has also conceived a son in her old age.  She who was said to be infertile is already six months along, since nothing is impossible with God."

You have to lose that last verse in order to portray Mary as feisty and independent by modern standards.  But then, modern standards insist "slave" is a forbidden word and never, as in this context, a statement of humility and acceptance.  Luke's theology is subtle, and it doesn't do to over-read that last verse either, and conclude that Mary unduly abased herself before the angel.  Here Luke provides a contrast with Zechariah, the male priest who should be the standard bearer for correct behavior before a messenger of God.  The new thing Mary announces in her Magnificat flows directly from her words here.  "My soul magnifies the Lord," she sings, and goes on to announce the chaos and new order God has in store.  She's already begun that by one-upping the husband of her cousin Elizabeth.  Zechariah was terrified, and demanded a sign.  Mary is humble, and only asks for more information.  Her question is even practical, which shows her wisdom.  Zechariah wants to negotiate, to be on equal footing with the angel, if not in charge.  Mary wants to understand, and this, too, is why the child will be holy.  Mary doesn't abase herself before God; Mary accepts her place.  And that, as her son will one day say in a parable, is what raises her up.  Zechariah claims his place at the head table, in the seat of honor, and he is lead away to a lower place.  Mary accepts the lowest place, and she is led to the honored position.

Luke, as I said, is a very subtle theologian.