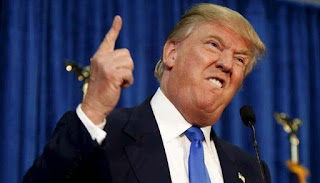 The world needs more of Wodehouse's finely honed sense of farce, if only to stem the tide of stentorian statements like this:

When a purportedly major presidential candidate, leading in the polls less than two months before the first votes are cast, proposes that we keep people out of the country based entirely on their religion – well, it feels like apocalyptic science-fiction, as if we were all living inside “The Man in the High Castle,” but I can only conclude that the moment to stand up and be counted is upon us.


Oh, calm down and stop taking yourself so seriously.  For one thing, "leading in the polls" doesn't mean burning the Reichstag or marking the calendar for Kristallnacht  (and frankly, having an adult life that "extends well back into the 20th century" doesn't mean so much, either; a lot of us have that, but you don't hear us using it to claim some kind of historical authority.  Or maybe we do, but we sure sound damned fatuous when we do so, if this is any example.).  But "leading in the polls" doesn't, as I started to say, mean a damned thing.  To wit:

For now, most surveys cover Republican-leaning adults or registered voters, rather than likely voters. Combine that with the poor response rates to polls and the fact that an increasing number of polls use nontraditional sampling methods, and it’s not clear how much overlap there is between the people included in these surveys and the relatively small share of Republicans who will turn up to vote in primaries and caucuses.


Don't go so fast through there you miss the reference to the reliability of polls, for which the response rate is poor (and that affects the sampling), and the methods of sampling themselves raise issues; making polls not all that good as predictors of the future (as we have seen in elections recently past; but still we don't learn).

But there’s another, more fundamental problem. That 25 or 30 percent of the vote isn’t really Donald Trump’s for the keeping. In fact, it doesn’t belong to any candidate. If past nomination races are any guide, the vast majority of eventual Republican voters haven’t made up their minds yet.


And that's not 20-30 percent of the American public; nowhere near, in fact:

Right now, [Trump] has 25 to 30 percent of the vote in polls among the roughly 25 percent of Americans who identify as Republican. (That’s something like 6 to 8 percent of the electorate overall, or about the same share of people who think the Apollo moon landings were faked.)

So about the same number of people who could be convinced Kubrick filmed the Apollo moon landing on a sound stage, can be considered hard-core supporters of Donald Trump.  If we're in Philip K. Dick territory, it's only the Dick of drug induced paranoia.  We're nowhere near a radical alternative history lesson.  We're certainly not here:

It’s the moment to ask yourself whose side you’re on, and the moment to observe that those who would sacrifice essential liberty for the sake of temporary safety will get neither. Would you have spoken out in Germany in 1933, or 1936, or 1939, risking your own safety and that of your family, or would you have kept on going with your head down? It is time for those questions too, and also for the one that U.S. Army chief counsel Joseph N. Welch famously asked Sen. Joseph McCarthy in 1954: “Have you no sense of decency, sir, at long last?”

This isn't the day when the entire world sat silently and listened to Trump rave.  Trump has already waffled on the details of his plan; national leaders of others countries have already denounced his stupid statement; the White House Press Secretary said it made Trump unqualified to be President, and indicated the same for every GOP candidate who didn't denounce Trump in no uncertain terms.  Hell, even Paul Ryan came before the cameras in his freshman year beard to denounce what Trump said.  "Have you no shame?" is not the question.  The question is, how many people are taking this seriously?  And the best answer we have right now is:  about the same number who take seriously the claim the moon landing was a fake and a conspiracy.

As Charlie Pierce is wont to say, some of those people at Salon need to take a cold shower.

But it isn't Trump's fault; it's ours.  At least, that's what Mr. O'Hehir insists.  We created this Frankenstein monster, because....well, I'm not sure what we did.  For someone who's adult life extends well back into the 20th century, O'Hehir seems oddly ignorant of the violence of the '60's, especially against blacks and civil rights workers; or the political violence of the '70's; the sanctions cruelty in Central America in the '80's; the lunatic politics that has run from the defeat of Goldwater to the present day through the GOP, a party that stopped representing the country-club set sometime just after poor Barry was trounced by LBJ.  We did this?  Considering what we've done in America to Africans, natives, the people of the Philippines, Cuba, Vietnam....I don't think the presence of Donald Trump, politician, is even a patch.

And since Trump is so determined to do what Bill Maher and Sam Harris want to do, which is denounce "Muslims," will somebody finally point out the racism here, because even Donald Trump doesn't imagine refusing entry to the country to Asians; and yet the majority of the world's Muslims live in Southeast Asia.

We aren't going to be blocking Somalis from coming here, or Indonesians; we're going to block "Muslims," and by "Muslim" we mean "Arabs."  Even if we aren't quite sure of the distinction between "Arabs" as an ethnic group, and as a nationality.

But it's not about race, because it's never about race; it's only about Muslims, except it's only about what we think Muslims look like, and it turns out Muslims look like people with certain racial characteristics.  And the rest are just not "real" Muslims; or at least not real threats.  Or something.  And that's been going on for years.  In fact, if you want to see something really scary, nine years ago, I wrote this:

By the way, on p. 85, [Sam] Harris asserts that all adherents to Islam are dangerous, crazy, and violent. His support for this sweeping generalization that encompasses over 1 billion people? I will quote his explanation: "Muslims are utterly deranged by their religious faith." The emphasis is in the original. Reflect on the fact that, were this statement made about Jews, or African Americans, or even Asians or Mexicans, he would be vilified as a racist. The difference here is...?

I'll be glad when this kind of nonsense has run its course.

Mr. Harris is still a part of this discussion.  He agrees with Ted Cruz that we should support Christians coming to this country over Muslims, which says something about his antipathy to Muslims.  I rather like what Noam Chomsky said when asked about Harris' comments:

“A person who makes charges like that either provides evidence, or is telling us, loud and clear, that he merits only contempt. I presume that he provided no evidence.”

I agree Trump (and Harris) make frightening noises; but I think the only proper response to them is contempt,  Rather than contempt, however, Mr. O'Hehir ends his argument with a final rhetorical flourish (the kind we should all be taught to avoid):

America has gone much too far down a dark road, and we don’t have a light or a map to find our way back.


Oh, you wish times were as bad as that, so you could say you were there and fought the good fight, pointed out the emperor had no clothes, asked the Senator if at long last he had no shame, sounded the warning about the danger of Nazis in Germany, or of Hitler as Chancellor.

But it ain't so.  Trump has not changed a country that could overlook Wounded Knee for almost a century, could bury the Trail of Tears in a memory hole, could ignore the last violation of the natives by the opening of the Oklahoma territory; that could forget the imperialism of the war in the Philippines, or be so content to still be navel gazing about Vietnam 50 years on; or pat itself on the back for canonizing Martin Luther King after we killed him; or forget so soon Bobby Kennedy and LBJ walking through the poor rural areas of America (are there still poor rural areas in America?  Or are they all rich white Republican enclaves?  Jennifer Lawrence's fist film was set in as fictional a landscape as Panem, wasn't it?); a country that still can't accept why the Civil War was fought, or what we owe to the slaves who built this country, is supposed to have nightmares because Donald Trump is leading in the polls among GOP voters two months before the first caucus?

No, I don't think so.  Still, as Wodehouse noted:  "It is all very well to excite pity and terror, as Aristotle recommends, but there are limits."

Trump should excite neither pity nor terror.  He isn't a sign of anything, except that if we have a national salvation, it does not lie in politics.