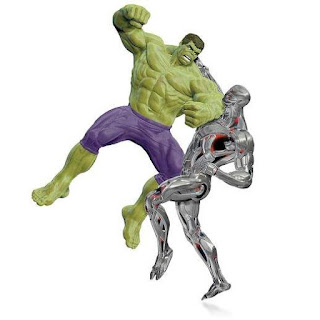 Mrs Breuer's mother, Rita, began collecting antique Christmas decorations in the 1970s. Her husband had said he wanted the sort of old-fashioned German tree that his grandmother used to have. But Rita Breuer and her daughter soon started to unearth bizarre tree decorations that had little to do with the traditional Christmas. First World War items included a miniature glass soldier carrying a hand grenade and military tree baubles in the shape of shells and tanks.*

"The trend continued into the Nazi era," Mrs Breuer said. The church was too intimidated to protest, and the majority of Germans continued with the traditions they had become used to. "The Nazi Christmas ideology appears to have been adhered to most by the families of party activists who lived in towns," she added. The Nazi version of some German carols that were stripped of their Christian content survive and are still unwittingly sung by today's Germans.

I want to say the Hallmark ornaments like the above are in-line with the miniature glass soldier carrying a hand grenade; but then again, Hallmark hasn't made a Punisher ornament yet, or a Rambo, for that matter; so I guess it's all good.

I will add that the idea that Christians "stole" Christmas traditions from pagans is a bit rich, as well as a sign of information deficit disorder.  It's a common problem, especially in an information besotted age like this one; or the 19th century, for that matter.  It's hard today to read Frazer's The Golden Bough without being aware of how prejudiced he was against most things Roman Catholic (he writes like a Puritan on anything to do with Catholic traditions in Europe) as well as most things not befitting an English gentleman to the manor born.  In other words, by modern standards he comes quite a bloomer about many details and conclusions.  I mention him because he could be the patron saint of many a comment on the internet about the origins of Christmas and its traditions.

None of which, frankly, are correct.  Nothing about Christmas was "stolen" by Christians; the very idea that it was is one founded in Puritanism (the infection that led to Deism in the late 18th century) rather than anthropology or any branch of scholarship.  And the irony is, it is neo-puritanism that insists Christmas must be cleansed of such traditions, but where the Puritans wanted to remove the Catholic influence from Christianity, neo-puritans want to remove Christianity from Christmas.

Which things like Hallmark ornaments should prove has already been done, despite the best efforts of Linus van Pelt.

The Puritans were not fans of Christmas celebrations, in no small part because they considered all the traditions associated with Christmas to be pagan in origin, much like the Catholic church itself (which the Anglican church was modeled on.  The name "Puritan" started as a pejorative because they wanted to "purify" the Church of England; later they wore it as a badge of honor.  History is full of such ironies.).  So anything they considered "pagan" was not to be admitted into the purity of their Christianity.  The Puritans are long gone, but they're argument about Christmas lingers on.

So we get statements about how many traditions of Christmas were "stolen" by the Church, which actually didn't adopt any of them.  Some churches do decorate their worship space with evergreen branches (but never mistletoe; or rare enough the exception proves the rule) or maybe even holly and its berries (or plastic simulacra), but that's as far as it goes.  No Santa Claus; no wassail bowls; you can even raise eyebrows if you serve hot chocolate and cinnamon rolls on Christmas Day.

Yule logs, roast meats, grand feasts, evergreens, etc., etc.:  all kept in cultures that converted to Christianity because the church didn't expunge them.  Protestants did, to some degree; it's one reason the Carmina Gadelica preserved the prayers and charms of the Highland people; the Presbyterians were busy eliminating such practices.  Most of what was kept was either deemed harmless or, like St. Brigid in Ireland, converted to Christianity.

But that doesn't make St. Brigid an invalid saint; well, unless you're a Puritan, and then all saints are invalid.

It's not, in other words, an "objective" position on Christmas traditions to say they were "stolen."  It's not even a valid position; no anthropologist would agree with you (no credible one, anyway).  Most of the anthropology that did argue for such "theft" (Sir James Frazer comes prominently to mind) has been discarded in favor of more objective (!) assessments, assessments that don't assume Frazer's prejudices are also the truth.

My favorite example of this is Wikipedia entry which argues that it is transparently clear many Christmas traditions were overlaid on pagan ones, meaning the Church "stole" them in order to keep the people.  Well, first, that appropriation of culture by Christians goes back to Paul (his fight with Peter was over how much of Jewish law to impose on Christian converts), so:  duh.  But  I don't put much stock in Wikipedia, and this entry is as good an example why as any.  The article notes that the word "Jule" doesn't appear in any source until 900 C.E.   I'll just point out that's medieval Europe, not pre-Christian, or even pre-Roman, Europe.  So if "Jule" was popular in 10th century Germanic regions, it was a Christian Europe it was popular in.

You can make the same argument about the Christmas tree, which descends from the paradeisbaum of German passion plays (the tree in the Garden.  The Feast Day of Adam and Eve is in December).

The entry also makes the usual lazy assertion that Christians appropriated "pagan" traditions and rituals, and therefore those things we like most about Christmas aren't really "Christian."Most people converted to Christianity and kept living the lives they'd been living.  Some Protestants objected to that, as I said; sometimes the Roman Church objected.  But for the most part, the Church converted people and left their familiar traditions intact because those traditions didn't offend Christianity.  Christians from Catholics to the UCC have done enough stomping on native cultures around the world; there's no need to make up responsibility for things they didn't do.

And it's not really an offense against God (especially if you don't believe in God) or common humanity to sing for "Peace on Earth" under a bough of mistletoe or while swigging eggnog laced with bourbon standing near as big a burning log as your host could find, or while waiting for the Buche de Noel to be served.

So get over it.  It's not like Christianity was imposed on Europeans as if the Christians were colonizers and the natives mere slaves.  Hell, even the Indians on the subcontinent enjoy cricket.

Did they steal that from the British?

Anyway, I hate to bring the Nazis into this, since our cultural appropriation of Christmas is hardly as evil in intent as they were.  But it is nearly as hegemonic as the Nazis wanted to be.  Ironically, though, the "spirit of Christmas" prevails.  It is the one time of the year we are called to listen to the angels of our better nature, to at least pretend (as Bill Murray says at the end of "Scrooged") that we are as nice as we say we are, that "peace on earth" and "goodwill toward all" is supposed to be a universal sentiment.  We don't get there, but we try to.

And despite comic book characters fighting each other one somebody's tree this year, that's a Christmas gift worth cherishing every December.  It's the last Christian remnant of our popular Christmas, but it endures.  It is the part we haven't managed to remove, despite our best efforts to render the rest of the holiday as religion-free as possible.

Long may it survive.  It does us good to at least remember to express the sentiment annually.
Posted by Rmj at 4:55 PM