This is why we ask not to be led into temptation 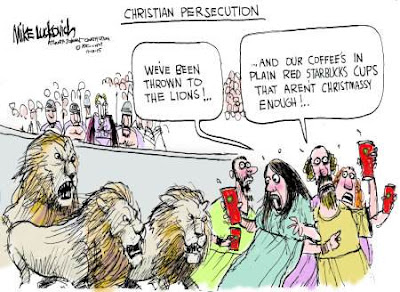 Because this cartoon, found in comments there, made this bit of news irresistible:

Rep. Doug Lamborn (R-CO) introduced a resolution last week in the House of Representatives that declared the "symbols and traditions of Christmas should be protected for use by those who celebrate Christmas."

The resolution would not only "recognize the importance of the symbols and traditions of Christmas," but would also "strongly disapprove of attempts to ban references to Christmas."

The move comes after evangelicals had a strong reaction to Starbucks' new holiday cup. The controversy began after Starbucks released just simple red cups for the holidays instead of cups with seasonal greetings or pictures on them. Some saw the move as another example of the "war on Christmas"