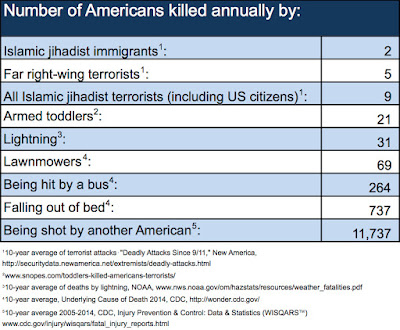 This is not really a surprise:

The Trump administration wants to revamp and rename a U.S. government program designed to counter all violent ideologies so that it focuses solely on Islamist extremism, five people briefed on the matter told Reuters.

Notice, in the chart, how many Americans are killed annually by "Far right-wing terrorists, especially v. "Islamic jihadist immigrants."

This, however, I simply count as asserted but not proven:

President Donald Trump threatened in a phone call with his Mexican counterpart to send U.S. troops to stop "bad hombres down there" unless the Mexican military does more to control them itself, according to an excerpt of a transcript of the conversation obtained by The Associated Press.

The excerpt of the call did not make clear who exactly Trump considered "bad hombres," — drug cartels, immigrants, or both — or the tone and context of the remark, made in a Friday morning phone call between the leaders. It also did not contain Mexican President Enrique Pena Nieto's response.

Still, the excerpt offers a rare and striking look at how the new president is conducting diplomacy behind closed doors. Trump's remark suggest he is using the same tough and blunt talk with world leaders that he used to rally crowds on the campaign trail.

A White House spokesman did not respond to requests for comment.

The phone call between the leaders was intended to patch things up between the new president and his ally. The two have had a series of public spats over Trump's determination to have Mexico pay for the planned border wall, something Mexico steadfastly refuses to agree to.

Unproven because of this, for one thing:

A person with access to the official transcript of the phone call provided only that portion of the conversation to The Associated Press. The person gave it on condition of anonymity because the administration did not make the details of the call public.

The Mexican website Aristegui Noticias on Tuesday published a similar account of the phone call, based on the reporting of journalist Dolia Estevez. The report described Trump as humiliating Pena Nieto in a confrontational conversation.

Mexico's foreign relations department denied that account, saying it "is based on absolute falsehoods."

That website may well have a reason to want to describe Pena Nieto as "humiliated."  The entire transcript is not available, which is another thing.  This is an administration that lied, most recently, about how many people were "inconvenienced" by the "travel ban" (which ISN'T a travel ban!  Not anymore, anyway).  All evidence is that Trump talks tough in public, and is a mouse in private.  During the primaries he spoke to Pena Nieto in Mexico City without mentioning or insisting that Mexico pay for the "wall," hen returned to the states to chunder about the "wall."  He was also going to pin drug companies to the mat, and then decided the problem was not drug companies and the market, but Medicaid.

So Trump "is using the same tough and blunt talk with world leaders that he used to rally crowds on the campaign trail"?  Sure he is.....

And even the White House won't talk about it?  Smells like bullshit to me.

"Pancho Villa Has Done An Amazing Job That Is Being Recognized More And More, I Notice."

On a brighter note:

U.S. District Judge Andre Birotte Jr. issued an order that “enjoined and restrained” the government from enforcing Trump’s order issued Friday. The ruling was sought by attorneys representing 28 plaintiffs from Yemen who have been held in transit in Djibouti since Trump signed his order Friday. His ruling, however, went beyond the named plaintiffs to include protections for “any other person from Iran, Iraq, Libya, Somalia, Sudan, Syria and Yemen with a valid immigrant visa,” a group estimated to include 90,000 people.