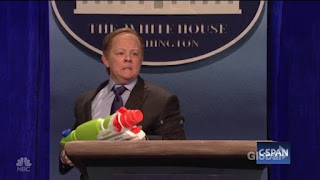 During a Jan. 29 appearance on ABC's "This Week," Spicer was quoted by the network as saying, "What do we say to the family who loses somebody over a terroristic [sic] -- to whether it's Atlanta or San Bernardino or the Boston bomber? Those people, each of whom had gone out to a country and then come back.”

Spicer then mentioned an Atlanta attack twice the next day: On "Morning Joe" — "whether you're talking about San Bernardino, Atlanta” — and during a press briefing.

At the briefing, a reporter asked why certain countries with ties to terrorism weren’t included in Trump’s immigration order. Spicer said that the administration was reviewing the process, “but I don't think you have to look any further than the families of the Boston Marathon, in Atlanta, in San Bernardino to ask if we can go further."

In an email to ABC News Wednesday, Spicer finally addressed his repeated reference to an Atlanta terror attack, writing that he "clearly meant Orlando."


But remember, this is all in the context of the danger of refugees in America.  So here is the entry on the official White House list of terrorist attacks ("attaks") not covered by the media:

TARGET: 49 killed and 53 wounded in shooting at a nightclub

Which is what Orlando has in common with Boston and San Bernadino.  This has what to do with refugees coming to America?