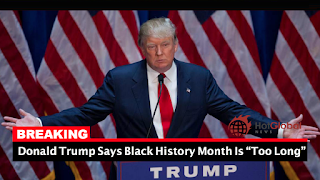 No; but you wouldn't be surprised if it was true, would you?

Ladies and gentlemen, the President of the United States:

"Frederick Douglass is an example of somebody who has done an amazing job and is being recognized more and more, I notice," Trump said, perhaps unable to articulate Douglass' historically recognized role as an abolitionist leader and the first black citizen to hold a high rank in the U.S. government.

He went on to name Harriet Tubman and Rosa Parks as examples of "black Americans who made America what it is today."

"A big impact," Trump said. "I'm proud to honor this heritage. I will be honoring it more and more."

And let's not leave out his golden oldie:


He works in words the way toddlers work in mud.  It's a heritage he will be honoring more and more.

Twitter apparently likes me again, so two tweets related to what Trump said:


This is a full transcript of President Trump's speech to his Black History Month event. pic.twitter.com/uJ9iXvUOGr
— Daniel Dale (@ddale8) February 1, 2017

Everything is all about him.