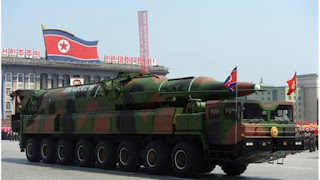 North Korea fired off a ballistic missile in a test.  The Prime Minister of Japan understood that was a problem:

North Korea is prohibited from carrying out ballistic missile launches under UN Security Council resolutions aimed in part at curbing the country's development of nuclear weapons.

Trump spoke after Abe and gave a one-sentence statement: "I just want everybody to understand and fully know that the United States of America stands behind Japan, its great ally, 100%."

The President of the United States had other things on his mind:

While on FAKE NEWS @CNN, Bernie Sanders was cut off for using the term fake news to describe the network. They said technical difficulties!
— Donald J. Trump (@realDonaldTrump) February 12, 2017

I know Mark Cuban well. He backed me big-time but I wasn't interested in taking all of his calls.He's not smart enough to run for president!
— Donald J. Trump (@realDonaldTrump) February 12, 2017

UPDATE:  And what's on the President's mind first thing this morning?

This is part of what he's talking about:

"The President’s powers here are beyond question," Miller said in an interview on "Fox News Sunday."

He said that the federal appeals court that upheld a stay on the executive order "has a long history of being overturned and overreaching" and that the government is "pursuing every single possible action" to counter it.

"A district judge in Seattle cannot make immigration law for the United States, cannot give foreign nationals and foreign countries rights they do not have, and cannot prevent the President of the United States from suspending the admission of refugees from Syria," Miller said Sunday in an interview on NBC's "Meet the Press."

"What the judges did, both at the 9th and at the district level, was to take power for themselves that belonged squarely in the hands of the President of the United States," he said.

Miller said that there is "no such thing as judicial supremacy."

"We've heard a lot of talk about how all the branches of government are equal," Miller said. "That's the point. They are equal. There's no such thing as judicial supremacy."


In short, throw Marbury and 214 years of legal precedent in the shredder; Donald Trump is President now.  As Don Moynihan pointed out:


US system of govt rests on Marbury vs. Madison understanding that when the branches clash, the exec follows the direction of courts. 3/
— Don Moynihan (@donmoyn) January 29, 2017

So what North Korea is up to doesn't matter; what matters is sponsoring a Constitutional crisis that goes to the bedrock of American government.  And it hasn't been four weeks yet.