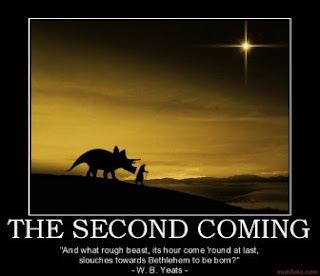 The gyres!  The gyres!
Old Rocky face, look forth!

W.B. Yeats was a great poet, a playwright, a critic, even a member of the Irish government.

Too long to explain what Yeats was up to; but his crazier ideas only informed his poetry, not his government service.  Under Reagan, it was the idea that we didn't need to steward the earth, Jeebus was gonna come soon and call everybody outta the pool!  Now it's Steve Bannon, who thinks we're in the "Fourth Revolution."  Oh, sorry, "Turning."  Which is what made me think of Yeats.

Bannon pressed Kaiser on one point during the interview. “He was talking about the wars of the Fourth Turnings,” Kaiser recalled. “You have the American Revolution, you have the Civil War, you have World War II; they’re getting bigger and bigger. Clearly, he was anticipating that in this Fourth Turning there would be one at least as big. And he really made an effort, I remember, to get me to say that on the air.”

Kaiser didn’t believe global war was preordained, so he demurred. The line of questioning didn’t make it into the documentary — a polemical piece, released in 2010, called “Generation Zero.”

Bannon, who’s now ensconced in the West Wing as President Donald Trump’s closest adviser, has been portrayed as Trump’s main ideas guy. But in interviews, speeches and writing — and especially in his embrace of Strauss and Howe — he has made clear that he is, first and foremost, an apocalypticist.

In Bannon’s view, we are in the midst of an existential war, and everything is a part of that conflict. Treaties must be torn up, enemies named, culture changed. Global conflagration, should it occur, would only prove the theory correct. For Bannon, the Fourth Turning has arrived. The Grey Champion, a messianic strongman figure, may have already emerged. The apocalypse is now.

“What we are witnessing,” Bannon told The Washington Post last month, “is the birth of a new political order.”


And he doesn't mean the "New World Order" George H.W. Bush declared after the Berlin Wall fell.  Funny, that order looks a lot like the old order, anyway.  Oh, well....

You got the part about apocalypse, right?  This is the "birth of a new political order."  Or, as Yeats put it:

Turning and turning in the widening gyre
The falcon cannot hear the falconer;
Things fall apart; the centre cannot hold;
Mere anarchy is loosed upon the world,
The blood-dimmed tide is loosed, and everywhere
The ceremony of innocence is drowned;
The best lack all conviction, while the worst
Are full of passionate intensity.

Surely some revelation is at hand;
Surely the Second Coming is at hand.
The Second Coming! Hardly are those words out
When a vast image out of Spiritus Mundi
Troubles my sight: a waste of desert sand;
A shape with lion body and the head of a man,
A gaze blank and pitiless as the sun,
Is moving its slow thighs, while all about it
Wind shadows of the indignant desert birds.

The darkness drops again but now I know
That twenty centuries of stony sleep
Were vexed to nightmare by a rocking cradle,
And what rough beast, its hour come round at last,
Slouches towards Bethlehem to be born?

Bannon has no such excuse, except fear of a brown planet:

"We're at the very beginning stages of a very brutal and bloody conflict, of which, if the people in this room, the people in the church, do not bind together and really form what I feel is an aspect of the church militant, to really be able to not just stand with our beliefs, but to fight for our beliefs against this new barbarity that's starting."

A barbarity, Bannon added, that would completely eradicate "everything we've been bequeathed over the last 2,000, 2,500 years," and which he clearly spelled out a few minutes later: "We are in an outright war against jihadist Islamic fascism. And this war is, I think, metastasizing far quicker than governments can handle it."


This is the guy telling Donald Trump to sign what is put in front of him, and the New York Times to "keep its mouth shut."

The other thing Yeats had going for him is that Auden was right:  "Poetry makes nothing happen."  The same can't be said for the chief strategist to the President of the United States.