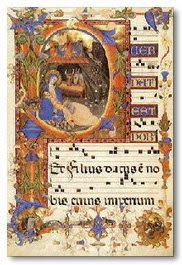 O Key of David, O royal power of Israel, controlling at your will the gate of heave: Come, break down the prison walls of death for those who dwell in darkness and the shadow of death, and lead your captive people to freedom.

THREE old men, of whom one had a bad reputation, came one day to Abba Achilles. The first asked him, "Father make me a fishing net." "I will not make you one," he replied. Then the second one said, "Of your charity make one, so that we may have a souvenir of you in the monastery." But he said, "I do not have time." Then the third one, who had a bad reputation, said, "Make me a fishing net, so that I may have something from your hands, Father." Abba Achilles answered him at once, "For you, I will make one." Then the two other old men asked him privately, "Why did you not want to do what we asked you, but you promised to do what he asked?" The old man gave them this answer, "I told you I would not make one, and you were not disappointed, since you thought I had no time. But if I had not made one for him, he would have said, 'The old man has heard about my sin, and that is why he does not want to make me anything,' and so our relationship would have broken down. But now I have cheered his soul, so that he will not be overcome with grief."
--The Sayings of the Desert Fathers
Posted by Rmj at 1:00 PM