But when they said, "Give us a king to lead us," this displeased Samuel... 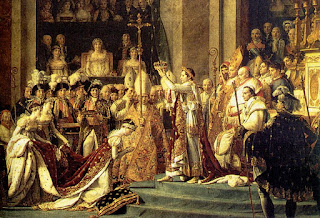 Warren, the prominent evangelical and founder of the Saddleback Church in Lake Forest, California, will deliver the ceremony's invocation.

It isn't the person giving the invocation I object to (no, really!). It's the idea.

We don't coronate our President. We don't give him power from a deity. The ceremony is not conducted even on the doorstep of a church. Why, then, do we "invoke" a deity at the Presidential Inauguration? And why must it be a Christian prayer? In fact, it must be Protestant. Imagine if a Presidential candidate asked a Roman Catholic Archbishop to perform the invocation. Or the Archbishop of an Orthodox Church. Dwight Eisenhower got away with that one; but he also got away with calling what we have today a "military/industrial complex." Which tells you how much the political discourse has shifted within, oh, my lifetime. Now the argument for Warren is that it punks Dobson, as Warren can be seen as the "leader" of the "evangelicals."

Why couldn't it be a Buddhist monk, a Muslim imam, or a Wiccan? An invocation is a prayer, after all, and our Constitution doesn't recognize any religion.

Yeah, that'll happen. Suddenly the "invocation" would be highly problematic then, huh?

And yeah, this is another shot in the "Obama is a Mooslem!" argument. But that just means religion is once again the handmaid to politics. Which isn't good, either, and the other reason so many Baptists supported Thomas Jefferson's argument which led to the inclusion of the First Amendment in the Constitution.

Besides, this is the time of year when we remember when politics and religion used to mix freely. The birth of a child prompted the Massacre of the Innocents. And that child grew up to tell us to give Caesar what is Caesar's. He was referring to the fact that Caesar considered himself divine; and had the full power of the State behind him, to enforce that opinion.