"Surely a revelation is at hand!" 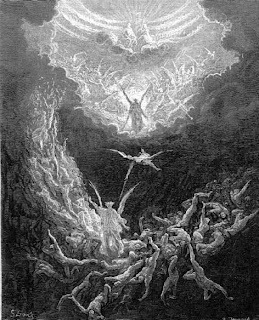 Denial is not just a river in Egypt:

A two-page memo that has been sent to Cabinet members and other high-ranking officials offers a guide for discussing Bush's eight-year tenure during their public speeches.

Titled "Speech Topper on the Bush Record," the talking points state that Bush "kept the American people safe" after the Sept. 11 terrorist attacks, lifted the economy after 2001 through tax cuts, curbed AIDS in Africa and maintained "the honor and the dignity of his office."

The document presents the Bush record as an unalloyed success.

"They also will answer, 'Lord, when did we see you hungry or thirsty or a stranger or needing clothes or sick or in prison, and did not help you?'

Then they will go away to eternal punishment, but the righteous to eternal life." (Matthew 25:44-46.)

I mean, really, what else can you say?