No One Could Have Predicted.... 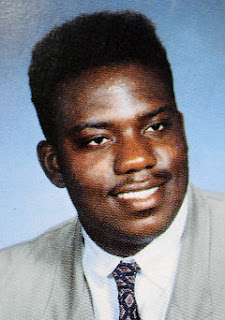 So far Google has 2365 articles on this issue. That's almost a sign of hope. Here is the description of what happened from "Democracy Now!":

More than 2,000 people had started lining up late Thursday night at the Wal-Mart in Valley Stream where DVDs, flat-panel television sets and many other products were discounted to attract crowds of bargain-hunters.

Jdimytai Damour was working as a maintenance man at Wal-Mart for the holidays. He had been trying to hold back the crowd of shoppers pressing against the store’s sliding-glass double doors. Just before the store’s scheduled 5 a.m. opening the doors shattered under the weight of the crowd. Damour–who is a big man, 270 pounds by some accounts–was thrown to the floor. Hundreds of rampaging shoppers stepped over, around and on him as they rushed into the store. He was pronounced dead just after 6am.

The Nassau County police said they were trying to determine what happened during the stampede, but said it was unclear if there would be any criminal charges. Patrick Purcell is the Director of Special Projects for the United Food and Commercial Workers Union Local 1500 which has called for an immediate investigation into Dmour"s death. Savitri D. is the director of the Church of Stop Shopping, led by Reverend Billy who has long called for Black Friday to be turned into “Buy Nothing Day.”

I've actually worked crowd control on a much smaller scale. I work in a very small bookstore that sometimes has some very large crowds drawn to see popular and notable authors. We always control the people who come, some as anxious to get their books signed as the shoppers on Long Island were to buy TV's. If we didn't strictly control access to the store, and strictly control the lines, we would have chaos. Reports from the scene indicate only one police officer was on hand, for a crowd of 5000, and he gave up and left. The Democracy Now articles notes the doors shattered under the sheer weight of the people. And how bad was it?

The crowd trampled the Freeport High School graduate - then went on to scour the shelves for sales, even after being told a man had died.

Maybe it's time to start paying attention to Rev. Billy and the Church of Stop Shopping. After all, as one Wal-Mart employee said:

“It was crazy,” said a worker in the electronics department who was in the store during the stampede. “The deals weren’t even that good.”