"My Death, Is It Possible?" 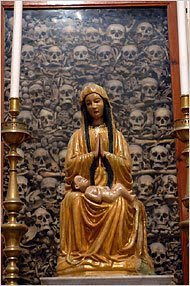 When people start talking about what kind of funeral they want, I remind them that they really won't have a say in it; that funerals are for the living, not the dead.

MUMBAI: The Muslim Council on Sunday decided not to allow burial of the bodies of the nine terrorists killed during the Mumbai siege in the Marine Lines Bada Qabrastan (cemetery).

The council said it was trying to send a message to all cemeteries in India that none of the bodies should be buried on Indian soil.

Bhai Jagtap, a Congress MLA from VP Road-JJ constituency, told TOI some Muslim organisations had approached him demanding that the terrorists should not be buried in any cemetery in India.