Tried to smoke a rubber cigar.... 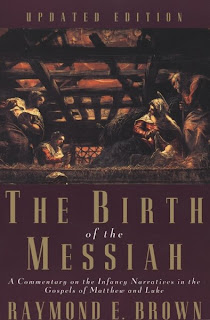 I know, I know: shotgun to a housefly. But honestly, it makes my head hurt:

Astronomers have calculated that Christmas should be in June, by charting the appearance of the 'Christmas star' which the Bible says led the three Wise Men to Jesus.

They found that a bright star which appeared over Bethlehem 2,000 years ago pinpointed the date of Christ's birth as June 17 rather than December 25.

The researchers claim the 'Christmas star' was most likely a magnificent conjunction of the planets Venus and Jupiter, which were so close together they would have shone unusually brightly as a single "beacon of light" which appeared suddenly.

If the team is correct, it would mean Jesus was a Gemini, not a Capricorn as previously believed.

This drove me to the only scholarly resource I have handy for the Nativity stories, Fr. Raymond Brown's The Birth of the Messiah. I would have gone with something by Dom Crossan or some other member of the Jesus Seminar, but (rightly or wrongly) they dismiss the nativity stories outright as fictions invented for literary and theological purposes by the authors of the gospels of Matthew and Luke, so Brown is the scholar of choice in this affair. He is also very conservative in these matters. How conservative? Well, his book bears both the Nihil Obstat and Imprimatur, so he's no Hans Küng. Fr. Brown very helpfully point out that, first, the only new part of this conjecture is putting Venus in the mix, instead of Saturn and Mars. Johannes Kepler came up with the idea of a conjunction of planets when he was trying to verify Matthew's story. Kepler also proposed a supernova as the possible explanation, which led to Arthur Clarke's rather silly foray into religion and ethics, "The Star." As Brown points out, no evidence for a supernova or any similar natural phenomenon has ever been found, so nobody seriously proposes this as an explanation for Matthew's story.

Second, the star did not "pinpoint" Jesus' birth. Pay attention here, this is deep Biblical scholarship we're about to plunge into:

"When Herod realized he had been duped by the astrologers, he was outraged. He then issued a death warrant for all the male children in Bethlehem and surrounding region two years old and younger. This corresponded to the time

So this conjunction occurred two years earlier? Except, of course, it did more than that:

And there guiding them on was the star that they had observed in the East; it led them forward until it came to a standstill above where the child lay.--Matthew 2:9b, SV

As Brown points out:

A star that rose in the East, appeared over Jerusalem, turned south to Bethlehem, and then came to rest over a house would have constituted a celestial phenomenon unparalleled in astronomical history; yet it received no notice in the records of the times. Brown, Raymond: The Birth of the Messiah, New York: Doubleday, 1993, p. 188

Brown includes in a footnote to this sentence the information that even Chrysostom "pointed out that Matthew's account cannot fit any natural phenomenon." So the conjunction would not only have to occur twice within two years, it would have to rise in the East over Jerusalem, and then move south to Bethlehem. I think the celestial mechanics of that are, well: impossible. In order to accept this story enough to find a phenomenon to fit it, you have to accept a model of the heavens that is no more acceptable than a flat earth.

And, Kris Kristofferson may have thought Jesus was a Capricorn, but nobody else has ever seriously thought so. Of course, these astronomers, like the astrologers before them, mean well:

"This is not an attempt to decry religion. It's really backing it up as it shows there really was a bright object appearing in the East at the right time.

"Often when we mix science with religion in this kind of forum, it can upset people. In this case, I think this could serve to reinforce people's faith."

Previous theories have speculated the star was a supernova - an exploding star - or even a comet. But Mr Reneke says by narrowing the date down, the technology has provided the most compelling explanation yet.

I do love the appeal to technology as source of revelation. But that's another epistemological point altogether. The first question a team of scientists should be asking themselves is: why are you chasing down verification of an event that may never have occurred? As Fr. Brown says:

...this constitutes evidence of verisimilitude, not of history. Inclusion of these details would make Matthew's story intelligible and would be a natural way of expression. Christians who believed that Jesus was the Messiah might well explain him to Gentiles as the fulfillment of the expectation of a world ruler from Judea. If in the East, where there was contact with large Jewish colonies, some Gentiles were familiar with Jewish messianic expectation, this could easily have been dramatized by Christians as a readiness to accept the birth of Jesus. Christians, sharing the general belief that celestial phenomena marked the birth of great men, may have reflected on astronomical peculiarities at the time of Jesus' borth, e.g., a supernova, or Halley's comet, or a conjunction of Jupiter, Saturn, and Mars, and, in retrospect, may have fastened on one or the other as a sign from God that His Son was going to be born. Yet, these contacts of the Matthean story with culture of its time do little to establish that the story is factual or to account for what originally inspired it. The original inspiration, in the judgment of many scholars, is to be sought in popular reflection on the OT.

So instead of reading this kind of "news story," can we just encourage people to read Fr. Brown's book?

Admittedly, at 695 pages without counting appendices, it is something of a doorstop. So maybe we can just leave well enough alone, and go back to trying to separate Matthew's magi from Luke's manger. Although that will upset a lot of nativity sets even more than a caganer....