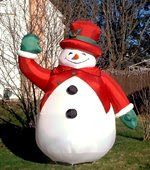 Yes, they are the weeniest flakes you've ever seen. My daughter even asked if it was just a child's memory, or were the snowflakes in Illinois really as big and beautiful as she remembered, because these were more like not quite sleet pellets. I told her her memory was sound.

And yes, it's not colder than 33F out there now, with the sun down. But the rain DID turn to snow, and while it would barely stick to your hair or shirt, it was, indeed, SNOW!!!!!

You should understand that I haven't seen snow since I left Chicago, which was about 10 years ago now. A former student came by my classroom a few weeks ago, and said she'd heard that, since we had a hurricane, we'd have a White Christmas. I didn't believe her then, and while the only snow man we're likely to see is the kind with air blowing up his posterior, it's still SNOWING!!!!