If everybody else was doing it, would you do it, too? 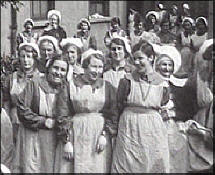 This is supposedly big news; or not.  Even Huffington Post doesn't feature it at the top of their "Religion" section.

Anyway:  the takeaway (supposedly) is that "religiosity" is in decline around the world.

Well, I guess.  Given what fundamentalists and people like Ralph Reed have done to it in America, and what the Roman Catholic church did to it around the world (first the Magdalene Laundries in Ireland, then the sex abuse scandals; is it any surprise the Irish are feeling less than bullish about their beloved Church?), why should we be surprised?

I think the dumbest connection I've seen (and I actually saw this on-line) is that the Internet is responsible for killing "belief."  Which itself, of course, is a belief, and nothing more.  But that would lead us to quibble about ideas like that "Religious" means, and I'll leave that to the Catholics:

"The word 'religious', if left unqualified, is too general to be used as the keyword in a survey questionnaire -- especially in the Irish context -- where people prefer words such as 'spiritual'. Being 'religious' is a very subjective measurement," said a spokesman.

"For example, in the Catholic Church, someone who attends Mass on a daily basis may not describe themselves as 'religious', yet they are outwardly a person of deep faith."

And there was this, which is easier to take from the Belfast Telegraph than from the Red C pdf, and means I don't have to put it into my own words:

The Red C global poll also found that the richer you got, the less religious you defined yourself. Religiosity was higher among the poor, with people in the bottom-income groups 17% more religious than those in the top-earning groups.

Which is really not terribly different from the situation that has persisted since, oh, I don't know, the time of Constantine?  It has always been easier to profess religious belief if you have nothing, than to give anymore than lip service to any idea of religion if you have all you need and then some.  As Mr. Dooley said, if you say God (or whoever) was your partner in wealth, do you split the profits with Him?


Is there really something new here?  Or is it just, again, a matter of where you put the emphasis?


Meanwhile, Michael Nugent of Atheism Ireland said the Red C poll showed people were rejecting the idea that atheism was an "extreme position".

He said the figure of 10% of the population being atheists could be an under-estimation, as there were still people who did not believe in a God, but disliked the "atheist" label.


I think that's about right.  Social pressure, more than anything else, made most people profess religious belief.  Certainly when Constantine converted and everybody else did, too, it wasn't so much a massive Great Awakening or Pentecost moment (funny how no Christian tradition records it as such), but just a matter of great convenience and social necessity.  Did every individual in the empire suddenly become "religious"?  It was better to just say you were, than to stand on principles of holding to another belief, or no belief.

If it has become more acceptable to announce your atheism, or at least not think of it as an "extreme position," I'm fine with that. Better true believers who are persons of deep faith, than non-believers who find it more convenient to ape the belief practices of those around them.  If that makes the believers a minority (as they have, in fact, always been) let them stand out by contrast with their non-believing compatriots. And let there be a commerce between them.

But please, no silly notions that this is another sign of the March of Progress or the "maturing of civilization," or some such foolishness.  You just look silly and ignorant espousing such empty ideas.*


*I know, I know; too much time spent in the wrong neighborhoods of the Intertubes.  Mea culpa, mea culpa, mea maxima culpa.