None dare call it racism 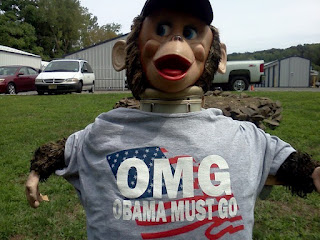 I feel like this should just be a continuing feature.

Mr. Romney's chances hinged to a large degree on running up his advantage among white voters in swing states who show deep strains of opposition to Mr. Obama but do not yet trust Mr. Romney to look out for their interests, Republican strategists say.

Many of those voters are economically disaffected, and the Romney campaign has been trying to reach them with appeals built around an assertion that Mr. Obama is making it easier for welfare recipients to avoid work. The Romney campaign is airing an advertisement falsely charging that Mr. Obama has "quietly announced" plans to eliminate work and job training requirements for welfare beneficiaries, a message Mr.

Romney's aides said resonates with working-class voters who see government as doing nothing for them.  The moves reflect a campaign infused with a sharper edge and overtones of class and race. On Friday, Mr. Romney said at a rally that no one had ever had to ask him about his birth certificate, and Mr. Ryan invoked his Catholicism and love of hunting. Democrats angrily said Mr. Romney's remark associated him with the fringe "birther" camp seeking falsely to portray Mr. Obama as not American.


When I lived in southern Illinois I often drove to Clayton, MO, the county seat of St. Louis County.  I took to watching the traffic stops, because I noticed that I never saw the white police officers pull over a white driver.  Whenever I saw a car stopped with a police vehicle behind it, lights flashing, the driver was always black.

I've never been randomly stopped, either, or asked for my driver's license except when I was speeding.  And my wife is almost jealous of my ability to talk my way out of tickets.  No one has ever asked me for my birth certificate, either.

But that's because I share one salient characteristic with Mitt Romney, which he knows he doesn't share with Barack Obama.

And yet the most we can say is that this indicates a "sharper edge" and "overtones of class and race."

When what it really indicates couldn't be more obvious.