"Everyone looks at the United States as uncivilized." 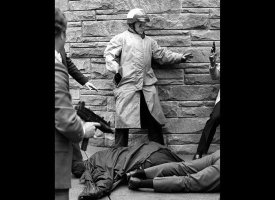 The latest mass shooting prompts another round of discussion about "gun rights" and "2nd Amendment rights" and other such blather. And there are good arguments against the individual right to keep and bear arms which Antonin Scalia thinks includes rocket launchers .  But all those arguments devolve into discussions with semi-legally-literate people about the "plain language" of the Constitution (which isn't plain at all) and how the "right" to "bear arms" is more absolute than any right in the 1st Amendment (you can't, as Justice Holmes properly said, shout "Fire" in a crowded theater; and you can't eat peyote buttons and call it a religious observance; and you can't assemble peaceably without a permit, and you aren't entitled to a permit just because....), and so on and so forth, and it's all bollocks.  You are talking to people who don't' want to listen and who don't want to understand and who truly believe Obama hasn't taken their guns yet because he's still fixin' to get around to it.  And he's gettin' a huge shipment of round-to-its in January, 2013.

Keep it simple, keep it clear, cede nothing, but take the argument on their grounds.

The Constitution gives every individual a right to keep and bear arms.  Okay, fine.  Obviously "individual" doesn't mean convicted felons, people of diminished capacity, or infants.  By neddie dingo, there are restrictions to this "right"!  Ignore that and move on, you'll make them nervous.

The Constitution does not give every individual a right to use those arms, however.  Criminals are not criminals before they pull the trigger, mass murderers are not mass murderers before they open fire in a crowded room.  They may have a right to own a small arsenal of guns, they don't have a right to discharge them as they please.  Neither do the rest of us.  This is why states now have "castle doctrines," and why even then the police will investigate you and maybe question your right to discharge a weapon you have a "right" to carry.

Watch carefully, now, because my hands will never leave my sleeves, and the pea will not end up under the shell you think it is under now.  But this isn't a game, either.

You have a right to own and even, under limited circumstances, carry a gun.  You don't have a Constitutional right to use it.  Taxing ammunition will soon make it too expensive for anyone to use except for hunting purposes.  Ammunition could even be controlled and dispensed at shooting ranges or for sporting events like skeet shooting; or the size of shot allowed for reloading shotguns could be severely limited, and the bullets available for hunting purposes likewise severely curtailed.  The guy who told the New York Times that when he got below 10,000 rounds he felt like he was running out, would just have to learn to run out.

I am mindful that the Supreme Court has made self-defense the central justification for an individual right to keep and bear arms.  That doesn't mean one can only defend oneself with free access to as many rounds of ammunition as one can afford.  There are prevailing societal interests in reducing gun violence that would weigh against any individual being able to purchase or hoard massive amounts of ammunition, and laws could be written to still allow access to enough ammunition to defend oneself.  A box, literally, would do.  Any more than that, and you are either preparing for civil insurrection, or for a crime yourself.  Shooters who want to practice at a shooting range could purchase their ammunition at the range under very controlled circumstances and, like military trainees, account for every shell taken out and returned.  Access to ammunition can never be eliminated; but it can be greatly curtailed, to the benefit of both individuals and society at large.  Individuals may have a right to bear arms, but individuals have a greater right not be shot at.