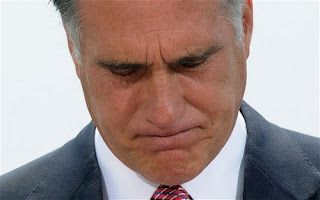 If you recall, Mitt Romney's original remarks about "Culture" and "Palestine" included comparisons between the U.S. and Mexico.

I was thinking this morning as I prepared to come into this room of a discussion I had across the country in the United States about my perceptions about differences between countries. And as you come here and you see the GDP per capita for instance in Israel which is about 21,000 dollars and you compare that with the GDP per capita just across the areas managed by the Palestinian Authority which is more like 10,000 dollars per capita you notice a dramatic, stark difference in economic vitality. And that is also between other countries that are near or next to each other. Chile and Ecuador, Mexico and the United States.


He tried to deny he'd said it, but now he's decided he likes the idea of superior cultures.

“During my recent trip to Israel, I had suggested that the choices a society makes about its culture play a role in creating prosperity, and that the significant disparity between Israeli and Palestinian living standards was powerfully influenced by it,” Romney wrote in the National Review. “In some quarters, that comment became the subject of controversy. But what exactly accounts for prosperity if not culture?”

Or the white man's burden?

But since Romney is only associated with a church which, until 1978, regarded African Americans as bearing the mark of Cain, and not openly racists groups like the KKK, this isn't racism.  Or rather, it is:

The statement, a suggestion that Israel had thrived while Palestinians struggled because of the innate superiority of the Israelis, was also something more. It was racist. There are two possibilities here. One is that Romney was given bad advice about what to say by his staff. The other is that he either ignored the advice he got or misunderstood it and was personally responsible for saying the stupid thing he said. (The likelihood of this latter possibility goes up, by the way, when it is noted that the language he used is similar to elements of his memoir in which he muses about the reason nations decline. In other words, he may actually believe the awful, damaging statement he made.)


But who is going to say it is, or ask if Romney believes what he says (it might well be of a piece with his Mormonism, which would be even more awkward)?  How much analysis is going to be devoted to that issue, rather than to when Mitt Romney is going to release his tax returns, or what his next ad says about President Obama?  Three guesses, first two don't count.

Even David Kurtz at TPM, who recommended that link, elided the explosive topic of racism that is so blatant it really can't be ignored.  Racism is just so unseemly we can't talk about it unless the subject is clearly of a social and economic underclass.

I mean, it's not like Romney's a skinhead or a Southerner....