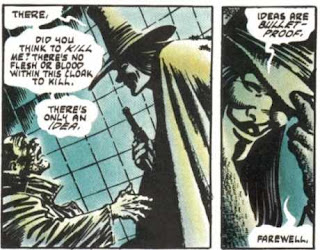 and that's the problem.

So Rep. Todd Akin says that "legitimate rape" doesn't lead to pregnancy because "the female body has ways to try to shut that whole thing down."  This is, of course, simply magical thinking.  But where does such thinking spring from?

Garance Franke-Ruta gives us a series of examples that this kind of thinking isn't limited to Mr. Akin, but a reader at TPM fills in the blanks at the Missouri level:

I grew up awash in the Pro-Life reasoning, and this idea of “real rape” (typically defined as the stranger assaulting the victim in a violent manner) preventing pregnancy was the standard response to the Pro-Choice argument about making exceptions for rape and incest.

The reasoning (as I recall it being explained) is that during acute stress, the body will prevent implantation, or else miscarry, due to the hormones released in response to stress. Now, any OB/GYN can explain to a Pro-Life person why this isn’t the case, but like the way any lawyer could easily dismantle the Birther argument, the truth doesn’t matter. The problem is how does a Pro-Life justify forcing rape victims to carry their babies to term, and the solution is to say that “real” rape victims don’t get pregnant and those who claim they were raped are disproven by the fact that she hadn’t miscarried. Shamefully, the second half of that justification includes dismissing the claims of rape victims who weren’t assaulted in the stereotypical manner, and even then, there are doubts about the veracity of the claims.

In other words, a desperate need for an explanation leads to a desperate explanation.  And this is why Rep. Akin spoke of "legitimate rape."  Truly non-consensual intercourse cannot lead to pregnancy; or so the reasoning goes.  If that sounds like it's one step away from the man planting his "soul" via his sperm to form a human being in the woman's "fertile soil," it should; because the reasoning is that, well, medieval.

I hesitate to use that words as a pejorative, but in this context it seems the only legitimate adjective.  In feudal Europe, where title to land was everything, the marriage ceremony took place on the church steps.  Not the sacrament of marriage, but the part the other landowners were interested in:  the exchange of title deeds.  It was a public declaration of who owned what, and what happened in the church sanctioned the children of that marriage, because they were next in line to legitimate ownership of the property.  Children of the marriage were, as is the law in Texas (and I presume all other 50 states) today, presumed to be the children of the husband, and so were presumed legitimate.  It was rather difficult to prove otherwise, so that presumption was a very important one to feudal society.  Aside from affairs, how might a woman get pregnant by a man not her husband?  Rape.

Rape is non-consensual sexual intercourse.  If you consent to the sex, you might even enjoy it.  If you enjoy it, as a woman, you might have an orgasm.  Of course, if you have sex, you also might get pregnant.  But what if you don't enjoy the sex; and why don't women get pregnant every time they have sex?

We understand the biology of reproduction today better than they did then, but the only outward sign they could look to, other than ejaculation, was the female orgasm.  And so the notion arose that the orgasm was essential to reproduction; without it, no baby.  A woman being raped is most unlikely to have an orgasm; ergo, she is most unlikely to get pregnant.  If she does, the child must be legitimate, i.e., her husband's; because otherwise, the sex was consensual, and not rape.

Which, honestly, is what so many anti-abortion fanatics are concerned with:  things, not people.  The 'babies' they profess to protect are not human beings to them, any more than the mothers are.  Their fanatical devotion to their cause belies any true interest in the human beings seeking either family planning counseling or abortions.  And it leads to the kind of vicious idiocy reflected in Rep. Akin's comments.  You can't draw a straight historical line from his "idea" back to medieval Europe.  This idea seems to be rooted in science, just as the medieval idea was rooted in Aristotle.  But you can put both Akin's idea and the medieval idea in the category of  "mindlessly idiotic."

Except, of course, the medieval idea has the excuse of unavoidable ignorance.