Things I did not know 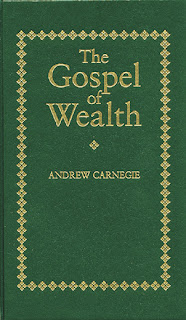 In writing the post below, I came across this on Wikipedia:

"Wealth",more commonly known as "The Gospel of Wealth" is an article written by Andrew Carnegie in 1889 that describes the responsibility of philanthropy by the new upper class of self-made rich. The central thesis of Carnegie's essay was the peril of allowing large sums of money to be passed into the hands of persons or organizations ill-equipped mentally or emotionally to cope with them.

In Wealth, Carnegie examines the modes of distributing accumulated wealth and capital to the communities it originates from. He preached that ostentatious living and amassing private treasures was wrong. He praised the high British taxes on the estates of dead millionaires, remarking that "By taxing estates heavily at death the State marks its condemnation of the selfish millionaire's unworthy life. It is desirable that nations should go much further in this direction." His "gospel of wealth" earned much praise, but did not win many converts.

That he didn't win converts doesn't surprise me.  But I've always had a soft spot in my heart for the old robber baron, because of his libraries:

Carnegie put his philosophy into practice through a program of gifts to endow public libraries, known as 'Carnegie libraries' in cities and towns throughout the United States and the English-speaking world, with the idea that he was thus providing people with the tools to better themselves.  In order to ensure that his gifts would not be wasted, he stipulated that the municipality must pass an ordinance establishing a tax to support the library's ongoing operating costs after the initial grant provided the costs for building and equipping the library.

After several communities squandered their grants on extravagant buildings, Carnegie established a system of architectural guidelines that mandated simplicity and functionality.

The library in my home town was a "Carnegie library."  For years, I just figured that was the name, like "First State Bank" or "Joe's Cleaners."  I spent many hours in that building, winter and summer, and read my way through as much of it as I could.  It provided me with the tools to better myself, so it fulfilled Mr. Carnegie's plan.

Note that Mr. Carnegie's argument was a moral one: the selfish millionaire deserved to have his money distributed to society upon his death, since he hoarded his wealth in life.  There are faint echoes of Dickens and Scrooge there. Today, of course, it is a mark of your morality that you are rich.  It is the poor who endanger our financial stability.

Interesting, but not surprising, that his "Gospel of Wealth" took on a meaning completely opposite to the one he intended.