Of opinions and chicken sandwiches and God's mercy 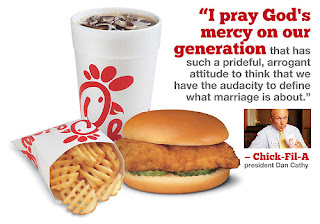 The local news today is full of stories of lines of cars circling blocks around local Chick-Fil-A's, yesterday, and packed restaurants with supporters quoted as standing up for the right to have an opinion.

Even Glenn Greenwald thinks Chick-Fil-A is entitled to its opinion, especially when governmental power is going to be used to quash that opinion.  And I suppose, in that sense, this is Skokie, Illinois all over again, and whether or not the Nazis have a right to a parade permit.

But I do wonder how many people would think Chick-Fil-A had a right to their opinion if that opinion was against mixed race marriages, or what in 1967 we called "miscegenation."  I don't have the statistics in front of me, but I do know "Star Trek" featured the first "interracial kiss" on television, between Uhura and Kirk (a forced kiss, but nonetheless).  At least, it's widely touted as the first interracial kiss on American TeeVee, and it would be decades before black and white couples would be shown at all (and then mostly in movies.  I can't think of a TV show that regularly features a mixed race (i.e., black and white; Asian or Hispanic seems to be okay, but not black and white) couple.  Maybe it's out there and I'm not familiar with it.

So what if Chick-Fil-A ownership was against miscegenation?  What if they were against women voting, or equal rights for women?  What if they based their opposition to the Voting Rights Act on Biblical principles?  Or if they objected to child labor laws, based on their religious beliefs?  Mother Jones became the name of  a magazine because she led a Children's Crusade to Teddy Roosevelt's summer retreat, demanding the then-President back laws restricting child labor.  TR told them to go pound sand.  Not as recent as Loving v. Virginia, but still within the 20th century.  Would support for Newt Gingrich's insane ideas on child labor be just an opinion?  Would a Biblically based opposition to Loving v. Virginia just be an "opinion"?  Would open racial hatred and support for white supremacy (based, again, on the Bible; there are plenty of people who can do that) be an "opinion," and nothing more?

Maybe it's a free speech issue when city mayors try to throw their weight around and decide who is acceptable, and who isn't, in their business communities.  But would anyone be as upset if Rahm Emmanuel had objected to a white supremacist trying to open a fast food franchise in Chicago?  Or would we be screaming at the ACLU for defending the rights of white supremacist to sell bad food at cheap prices?