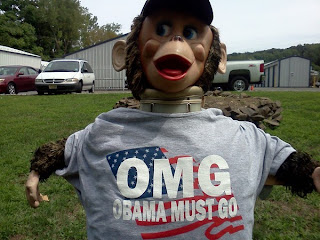 It didn't make it to the summary, but somewhere in this discussion with Max Fisher he pointed out that even schoolchildren in China learn about American race history: slavery, civil rights, etc.  But guidebooks to America warn against any discussion of such history, or of race at all.

A former Cedar Grove councilman who placed a large monkey figurine dressed in an anti-Barack Obama T-shirt outside his storage business denied the action was racially motivated, according to a report by Newark Patch.com.

Rick Bond put the figurine in front of Don-Ric Self Storage in the Essex County township but removed it Tuesday after complaints, the report said.

“I absolutely never thought of it as racial,” Bond told the website. “It’s ridiculous.”

Bond is a former Cedar Grove police officer who served on the town council from 1999-2003.

He said the statue was put up to scare geese away, the report said.


Nothing racial about that at all, right?  Nor in Donald Trump's repeated demands that Obama release his college transcripts, his passport records, anything and everything that will prove the State of Hawaii is part of a massive conspiracy to hide where the President was really born.  Yes, I know it's stupid, if only because it's Trump; but since when was racism clever and intelligent?

And, of course, the newer one is that Obama never attended Columbia University.  Which is completely in line with how he got into Harvard Law because he was black, not because he was qualified.  Trump, again, among others, demanding to see his transcripts so as to prove Obama shouldn't have been in college.  And where are Trump's transcripts?  Wayne Root makes the same argument.   It's even been said he made Harvard Law Review because he was black.  Because that's how blacks who aren't athletes or entertainers, succeed.  Especially if they are foreigners.  Because we give breaks to foreigners and blacks, and they don't deserve it.  Root is really quite explicit about that:

And my gut instinct says, there is an easy track that gets you into an Ivy League School. And you don't have to compete like a guy like me. I was valedictorian in my high school, top one half of one percent in my SAT scores. You don't have to do that if you're a foreign exchange student. They are looking for diversity, Sean. And that's an easy way to get into an Ivy League School. It changes the whole ballgame, it levels the field. If they are looking for a guy from Indonesia, and you happened to have bad grades, but you are a good talker, and a good interviewer and you got a great, exotic story, you're in.

But the newest one is this:

The condescension, the racism, it's all there.  And yes, Joe Walsh is an idiot.  But so is Wayne Root; after all, when is racism a sign of intelligence?.  Still, it's not about race; it's about how unfair everything is for white people today because of race.   Because, you know, only when you play the "race card" is it about race:

“My first reaction was to laugh,” Walsh told a local radio talk show Thursday. “I don’t know who this group was and I would love to look them in the eyes and say, ‘Get a life.’”

Walsh said he was just “having fun” when he made the remarks.

Walsh said that “every time anybody criticizes [Obama], the racist card is thrown out.”

I mean, Wayne Root worked his ass off to get into Columbia!  Why isn't he President?  HUH?

Because it's still about what it's not about.