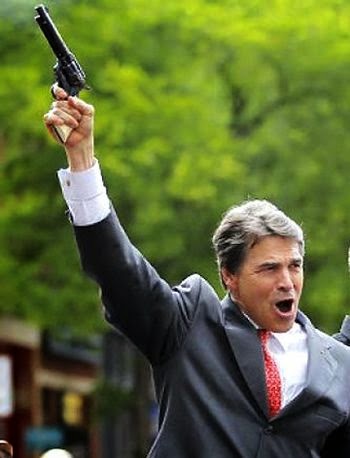 I'm following up on this because it's going to get interesting; and because we should remember that whatever is said in the court of public opinion doesn't matter one whit to the court of law.   Jonathan Chait (via NTodd) and other "humble bloggers" would do well to remember there is a reason we have a legal system, and that reason is because matters upon which we can disagree (were Perry's threats "reasonable," or not?) are questions of fact which we can engage juries to answer.*

And one question is: has Rick Perry been indicted because he vetoed a funding item, or because he tried to coerce a public official and abuse the power of his office?

The official Perry stance is:  you can't criminalize the legislative veto of the executive, to wit:

Unfortunately, there has been a sad history of the Travis County District Attorney's Office engaging in politically-motivated prosecutions, and this latest indictment of the governor is extremely questionable.  Rick Perry is a friend, he's a man of integrity - I am proud to stand with Rick Perry.

The Texas Constitution gives the governor the power to veto legislation, and a criminal indictment predicated on the exercise of his constitutional authority is, on its face, highly suspect.

P.S. I'm proud to stand with Governor Rick Perry, and Robert, I hope you are too. Please join in showing your support for him online using the hashtag #StandWithRickPerry.

That's all very clever, but let's be clear:  the indictment speaks in very specific statutory language about Perry's alleged violations of Texas criminal law; but it doesn't provide any specific facts.  This is the way criminal trials operate, and facts will be forthcoming at the trial.  In the absence of a detailed statement of facts, however, the defendant gets to spin his own version of what the facts are, at least outside the courtroom and before the trial.

The indictment fairly closely tracks the language of the statute.  The facts presented at trial would presumably connect the veto to the threat, and argue the veto violates the law because the repeated demands for a quid pro quo (resign or I cut your funding) made the veto itself  a "misuse [of] government property, services, personnel, or any other thing of value belonging to the government that has come into the public servant's custody or possession by virtue of the public servant's office or employment."

And contrary to what I had posted earlier, Abuse of Official Capacity doesn't rest on a benefit to the officeholder, but is broader than that:

And one of the things the public servant has to do knowingly is misuse government property, as quoted above.

So, with intent to harm Lehmberg ("quit your job" is a rather serious harm), Perry vetoes her funding.  One wonders if the special prosecutor has testimony indicating Perry hoped this would force Lehmberg to resign, or force Travis County officials to pressure her to resign; if so, the intent to harm is 2/3rds of the way to being established.  The prosecutor has said he took testimony from over 40 witnesses; the real question is, what did they have to say?

If the prosecutor can't establish intent and harm, of course, this count fails; or if the court finds the governor's use of the veto power escapes the "misuse" clause quoted above.  But those are problems for the prosecutor, and problems inherent in trying white collar crimes.  It is why white collar crimes are so much harder to prosecute than regular crimes:  because actions are subject to definition, and pointing a gun at someone or stealing their property is, by comparison, a fairly straight-forward matter.

As to the second count,  the special prosecutor has noted:  "Count two of the indictment charges him with coercion for threatening Rosemary Lehmberg in her capacity as public servant to resign or otherwise he would veto the legislation."  Coercion of a Public Servant is a bit more straightforward:

As I've said, "Quit your job or lose your funding" sounds pretty damned coercive to me, especially when Perry had no power to force Lehmberg's resignation, and no authority over her other than the funding of the ethics office.  This one has even less to do with Perry's veto, and almost everything to with what he said both before and after the veto (when he made it clear he was trying to push Lehmberg out).

Ted Cruz also fuzzes the issue, because this indictment was issued by a grand jury empaneled by a special prosecutor  who is a former assistant US Attorney, a Republican, and a resident of Bexar County appointed by a Williamson County judge.  Travis County had nothing to do with it.  We can expect more of that, but Twitter and Facebook aren't going to determine the validity of the criminal charges against Perry:  a court of law is.  I don't think this case is a "slam dunk," but then white collar crime cases seldom are.

I don't think it's a gross abuse of power, either.   Prosecutors always bring the most serious charge they think the facts will support.  It may be the abuse of official capacity charge is so tied up with the legislative veto the courts just don't want to touch it.**  That leaves the lesser charge, which is a more straightforward criminal act, and can be decided without even taking the veto into account.  On the second charge it doesn't matter if Perry carried out his threat; the threat itself is the criminal act.

Whatever happens, this matter will play out in two courts:  public opinion, and the law. Ultimately, only one of those really matters, and it will greatly affect the other.

*We also do well to remember the Special Prosecutor has said some 40+ witnesses testified to the grand jury.  None of that testimony is referenced in the indictment, yet surely much of it will be presented at trial.  Change the facts, change the outcome; and at this point, we don't have as many facts as the prosecutor does.  Bloggers like Chait should also be wary of displaying their ignorance so publicly.

**On the other hand, if Perry had kept his mouth shut, there'd be no real issue to raise about the veto of the funds, except a political one.  It's the threat that makes the veto criminal, so the court may find an out in the particular circumstances of this case.  Which may be a lesson to smarter politicians in the future, but most politicians have been smart enough never to do something this dumb.  Perry's stupidity is not likely to be much of a legal defense.