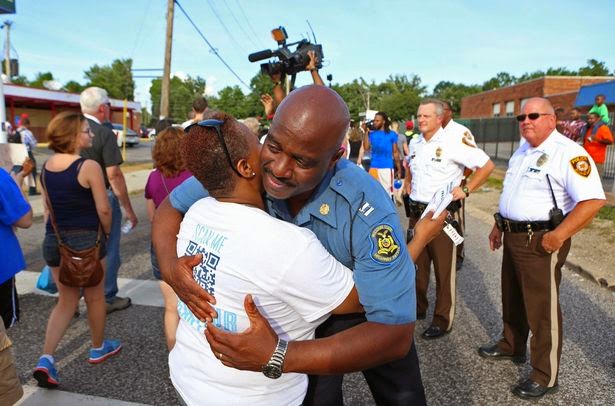 Of the websites I generally follow/look in on (there aren't that many), Huffington Post had reports on Capt. Ronald Johnson and the changes in Ferguson up last night, and headlined new ones this morning (gone already from the headline, so I won't give you a link).  TPM had stories on it (I linked them earlier).  Slate has a story that's mostly a reaction to the release of the officer's name by Ferguson (or St Louis County) PD:

"Today I will meet with the chief of Ferguson and talk about what was released and try to get a copy," he said, emphasizing several times that he will be returning to the protest site today to meet with residents. "This afternoon I will be walking back down to the QuikTrip and I will talk to the people there and explain what I see in the packet and some of the questions that may have been unclear in the presentation this morning, I will try to make those clear."
...
One questioner asked him a broad question about race relations and justice. "The governor talked about old wounds," Johnson said. "This is an old wound. It's time to stop saying it's an old wound, and close it for good." Later he spoke about the future of the community: "Yesterday we saw what it could be. We saw what it should be. And we saw what it will be."

And Salon?  Salon started the day with a new Digby post that was already retreading ground trampled in the past four days, and further out of step with the news from Ferguson as of last night.  It followed with four new articles about Ferguson, two about the press conference this morning.

Nothing, though, about what changed last night.  Nothing about the reason to feel this situation is getting better, not worse.  Google "Salon" and "Ronald Johnson" and you won't find anything posted today, unless it's in a comment.

Capt. Johnson's remarks today reflect an attitude that could very effectively challenge the militarization of the police.  This could be the change the country desperately needs, the vision that cooperation and compassion work far better than force and wielding authority like a club.

This is the story that needs to be told if we are going to overcome the racism and imperialism that are the twin problems of American society.  I find it disappointing and disturbing that, in some quarters, it is being silenced altogether.
Posted by Rmj at 1:01 PM