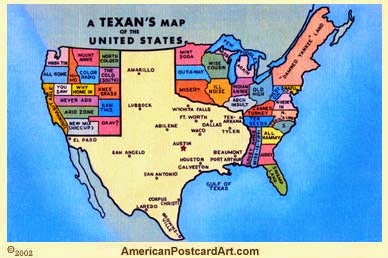 Because when I was a kid, I thought this map was pretty damned accurate....

When the issue is Texas I'm more than a bit of a home-town boy, and I have to admit what I felt about the reaction to the Perry indictment can be fairly described as a mild anger that "Yankees" (all non-Texans who don't hale from Oklahoma, Arkansas, or Louisiana.  We got other names for them.) seem to think they understand the Texas legal system better than Texans do.  To wit (as they say in Harvard Yard):

Jeff Cohen, Chronicle executive editor for opinions & editorials, said the local press cannot just brush off the legal proceeding as political, adding, "we've been following him for a number of years ... we respect what the grand jury has done here, we respect the process, and we believe it ought to run its course."

Keven Ann Willey, Morning News editorial page editor, said journalists may not know all of the evidence, but "we do know that a grand jury who viewed evidence thinks that there's enough there to have a trial and that is not nothing." She later said of the Beltway pundits: "From afar sometimes it's hard to appreciate the background in detail."

Mike Norman, editorial director of the Fort Worth Star-Telegram, said local media "want to see the case laid out."

"The indictment is not the case and the national analysis is attacking the indictment and they don't seem to see how this can be anything other than politics," Norman said. "He's been our governor for more than 13 years now, we watch him more closely. We want to see the case laid out, there's going to be all sorts of opportunities for his attorneys to go after this."

He also defended the local legal process: "If you're saying that that process which our legal system set up produced only a political result, then you are saying the whole justice system is corrupt and I don't believe that is the case.

Bob Ray Sanders, Star-Telegram associate editor and senior columnist, echoed that view.
"I think the national press took off very early on the idea that this was a vague law or that the governor has a right to do almost anything he wants to do," he said, later adding, "Sadly, the national press has to react so quickly with so little information sometimes and some of them on the liberal side feel some guilt because they have criticized him so much ... they want to give him the benefit of the doubt, and by doing that they left their journalism on the side."


I have absolutely no problem opining that Rick Perry is as crooked as a dog's hind leg.  He has enough money he'll never have to work another day in his life, and he's grown accustomed to a style of living he didn't learn in west Texas.  How that can be when he's never held anything other than a government job in his adult life is a mystery that apparently doesn't bear looking into, especially since only the Governor's job included housing.

I also have no problem pointing out that the national press, much as they did in Whitewater, has no problem assuming they know more about local political and criminal stories than the residents of that area do, and perhaps having been taken in by Whitewater they now all lean the other way to exonerate a public figure like Perry.

And besides, the Texas criminal justice system isn't nearly as screwed up as Rick Perry is.

Read between the lines up there, and you'll find a lot of Texas journalists agreeing with my assessment:  Perry is crooked, and it may have finally caught up with him.  Maybe it's Al Capone going to jail for tax evasion, but you take the charges you can prove in court.  And, of course, executives are supposed to be able to do whatever they want to do, unless it's the Speaker of the House trying to sue the President of the United States, and then no legal opinion is assessed as to what a fool John Boehner is.

So it's not just in Texas that the national press leaves its journalism on the side.  After all, Boehner simply filed a civil suit, something anyone can do simply by paying the filing fee.  Rick Perry was indicted after a complaint was brought which a judge decided merited investigation, and so appointed a special prosecutor, who investigated and then convened a grand jury.  Down here, we call that "due process."