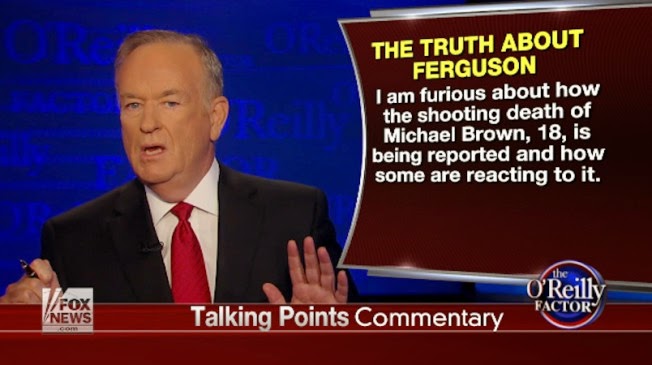 And absolutely nothing was said about this:

For Obama to aggressively insert himself into the Ferguson story now is to invite a right-wing media hurricane that would likely rage for weeks. How do we know? Because again and again we’ve seen President Obama’s attempts to engage on similar issues act as a lightning rod for these angry voices, quickly making it impossible to focus on the pressing issue at hand.

Eric Boehlert's argument is that Obama can't discuss race precisely because it always engenders "a right-wing media hurricane...making it impossible to focus on the pressing issue at hand."

Right now, this is how we discuss race in America.  Obama can't transcend that discussion; he can only pour kerosene on the fire; and Boehlert makes a solid point:  a part of the problem is the media that won't acknowledge this:

I’m not suggesting right-wing media hate and the fevered, irrational Obama loathing it tries to generate should stop the president from advancing his agenda. But to pretend the dark force doesn’t exist today in American politics is to miss one of the hallmarks of the Obama presidency.

Part of the problem with discussing race in this country is that the discussion involves us, and our attitudes toward race; our tendency to notice the black man on the street, in the store, walking behind us.  Our tendency to overlook black deaths and notice only white deaths, to give the white officer the benefit of the doubt especially when the criminal is a person of color; to deem an assault by a person of color on a white as more serious, an assault by a white person on a person of color as less serious.    What is keeping us from addressing these issues?  The silence of the President?

And if he adds his voice, does the conversation suddenly take on more gravitas?  Or is the subject shifted to what's wrong with talking about race?  Yes, I would rather ignore Bill O'Reilly and Rush Limbaugh; in terms of absolute numbers, their audiences are a tiny portion of the U.S. population.  But it's only a tiny portion of the U.S. population that bothers to vote consistently, and there's a lot of overlap between those two groups.  And ignoring racist buffoons like O'Reilly and Limbaugh is why people get to say that if only Obama would address racism in America, the rest of us could, and the conversation would get away from the rantings of FoxNews and other right-wing media outlets.

Except it wouldn't, of course; and that's the point where ignoring them won't make them go away.